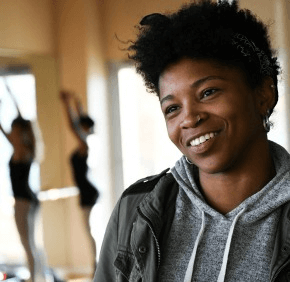 By Maureen Cromer
mcromer@CatholicReview.org
Like many little girls, Unissa Cruse-Ferguson was dancing by the age of three. Slipping into ballet shoes for the first time not long after, Ferguson found her passion.
Twenty years later, the Mercy High School alumnae will make her national dancing debut Dec, 7 as a cast member of NBC’s “Hairspray Live.”
Ferguson’s mother, Deborah Cruse, wanted her to be active and involved in the arts. Dancing, however, has taught Ferguson more than just an appreciation for the arts.
Cruse wanted Ferguson to learn structure, strength and discipline when it came to dance. Through ballet, Ferguson discovered how a dancer must be both agile and strong while still moving gracefully.
“My body is my instrument and dancing has taught me so much about the body,” said Ferguson. “Not only about physical health, but also about movement and body language. It’s made me understand what my body can do.”
Beginning in the Towson University Children’s Dance Division before moving along to Mercy High School and then the University of Maryland, Gloria Lang has had a special relationship with Ferguson.

Mercy High School Class of 2010 graduate, Unissa Cruse-Ferguson, is humbled by the opportunity to appear on NBC’s broadcast of Hairspray Live! Dec. 7. (Kevin J. Parks | CR Staff)
“Unissa is an incredibly dedicated, energetic, humorous dancer,” said Lang, director of dance at Mercy High School. “She was definitely a leader in the dance programs, both at Towson and here at Mercy. She’s very strong-willed and motivated – she just shines.”
After graduating from the University of Maryland in 2014 with a bachelor of arts degree in dance and a bachelor of science degree in family sciences, Ferguson moved back to Baltimore to pursue her passion.
In April 2016, however, she suffered a devastating rib injury that  prevented her from dancing until September.
Motivated by friends and family, Ferguson stepped back into dancing by auditioning for the cast of “Hairspray Live” at the Hippodrome Sept. 15.
“I just wanted to prove to myself that I could still dance,” said Ferguson of the audition. “I wanted to be confident in my dancing again.”
After a full day of auditions, Ferguson was one of three finalists at the call to be chosen for the cast of “Hairspray Live.” On Sept. 20, with much of Baltimore watching, WBAL’s Megan Pringle knocked on Ferguson’s door to share the news that she had been selected.
“I was watching it on TV,” said Ferguson. “When Megan turned the corner, I saw my car and was just overwhelmed with this warm feeling. I couldn’t believe it.”
“You don’t see many good things happening to young people, especially young black teens, in Baltimore,” Ferguson continued. “But to see this, to be part of this and to be an inspiration for others – it’s unreal.”
Ferguson credits much of her success to her parents, Deborah and Harry, as well as her grandparents.
“Without their help, guidance and support, I wouldn’t be here today,” said Ferguson.
“This is a long time coming for Unissa,” said her mother, Deborah. “It’s an amazing feeling as a mother to see your child, who has been so diligent in her craft, finally find success. Hopefully, this is just the beginning.”
Hairspray Live will air on NBC Dec. 7 at 8 p.m.

Watch video of Unissa Cruse-Ferguson sharing what she was thankful for this Thanksgiving.