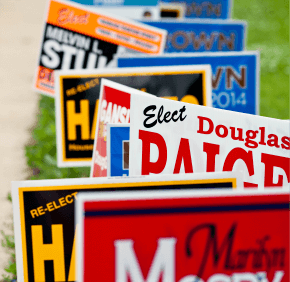 Interview by Maria Wiering
mwiering@CatholicReview.org
Maryland’s primary election is June 24. The Maryland Catholic Conference, which advocates for public policy on behalf of the state’s bishops, is urging Catholics to go to the polls. The Catholic Review asked Mary Ellen Russell, MCC executive director, why Catholics should care about the primary.
Q: Why does the primary election matter?
A: Three major reasons: many races in Maryland are decided in the primary; many primary races are decided by less than 100 votes; this year more than 50 of the 188 open seats in the Maryland General Assembly have been vacated by incumbents, so the outcome of those races in particular is very unpredictable and will depend greatly on voter turnout.
Q: Some parts of the state seem staunchly red or blue. Why should someone of the minority parties in those districts vote?
A: While change happens gradually, the only way it will come about is through individual actions – and every vote reflects that. If it’s really clear in a particular district that a minority party candidate can’t win in the general, it may be worth crossing party lines in order to vote for the best possible candidate even if he or she isn’t a member of your party.
Q: What does a voter do if he or she doesn’t agree with any of the district’s candidates?
A: It’s rare to find a candidate who agrees with you on every issue, but if none of the candidates seem to agree with the issues you think are important, spend time trying to find out what kind of a person each candidate is – are they respected by the community, by people in both parties? Are they willing to listen and work with you when they can, or are they rigidly attached to their opinions? What other groups are or are not endorsing the candidate?
Q: What should a voter do if he or she is registered in one party, but wants to affect the outcome of a race in the other party?
A: Anyone can switch parties to vote in the primary and then switch back again for the general election – but they have to do it before the voter registration deadline (June 3 for the primary and Oct. 14 for the general election).
Q: If my candidate doesn’t win, what can I do to influence the one elected?
A: It’s critically important to build a relationship with elected officials, regardless of whether you voted for them, particularly with regard to members of the General Assembly, who will represent you for the next four years. Constituents can have enormous influence on the decisions legislators make if they spend time making sure their legislators know who they are and what they care about.
Q: What should Catholics keep in mind as they head to the polls?
A: It’s important to be as informed as possible about the candidates, and to encourage everyone you know to vote. Check out the candidates’ responses to the conference’s survey at mdcathcon.org/elections for information about candidates for governor, Congress and the Maryland General Assembly.
Also see:
Catholics called to find special way to serve during Fortnight for Freedom
Where do candidates stand? MCC survey has the answers
Five things Catholics should know about the HHS mandates
PrevNext