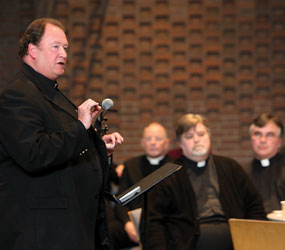 Nearly two dozen elementary schools in the Archdiocese of Baltimore reported an operating loss for the fiscal year 2008. In that same period, four high schools in the archdiocese had losses. In some cases, that loss was as much as $300,000.

Those and similar financial realities are among the factors that led Archbishop Edwin F. O’Brien to create a Blue Ribbon Committee on Schools. Its mission includes analyzing trends and devising a long-term strategic plan.

As that group prepared for its initial meeting on March 18, its executive director, Monsignor Robert L. Hartnett, the pastor of Our Lady of Mount Carmel in Essex, discussed the process with The Catholic Review.

Q: Has the Blue Ribbon Committee added any new members since its initial 15 members were announced Feb. 10?

A: After consultations with pastors and schools presidents, there was the suggestion that there wasn’t enough Catholic schools experience.

We’ve added a teacher, Maureen Creel, of St. John in Severna Park, our most recent Blue Ribbon School, and Sister of St. Joseph Helen Wiegman, who was the founding principal at Our Lady of Grace in Parkton. The religious communities created Catholic schools and gave so much time and energy to the institution; we needed to have someone from that background.

Q: What timetable are you operating under?

Q: Is it possible that some schools could be closed before the 2009-10 school year?

A: There is a process for evaluating schools and their viability that’s already in place. Parallel to that is this strategic planning process.

There may be some schools, because of enrollment, financial considerations, any number of reasons, that may not survive until the end of this planning process. I don’t know that for a fact, but I do know that central services isn’t in a position to financially support schools if they run into deficits of several hundred thousand dollars or up to a million. That was stated in the archbishop’s seven principles regarding this process, that he may have to address issues at specific schools that may lead to their closure.

A question I’ve heard from some is ‘if you close those schools, there’s already a plan, what’s the purpose of a committee?’ The hope is that central services will be able to sustain as many schools as possible until the plan is finished and ready to be implemented.

Might some schools close in the course of this planning process? Yes.

Is the archbishop hoping the archdiocese can sustain as many as possible until he gets to the end of this strategic plan and can begin to implement it? Absolutely, but it amazes me, when I talk to people who think that just because there’s a planning process, that nothing in the way of closures or realignment can happen until the plan is finished. That just may not be feasible in certain circumstances.

In meetings, people talk about those critical situations that require immediate attention. I don’t make those decisions, nor would I want to.

Q: Do you have sense of student registrations for the 2009-10 school year?

A: My sense is that registration is going OK, but there’s also a sense and understanding that it won’t really be known until August, when schools open their doors. Sometimes people register in March, then things change throughout the summer and they’re willing to leave the registration fee on the table and leave the system.

Q: Archbishop O’Brien has written about moving from a “system of schools” to a “schools system.” Can you elaborate?

Q: Are charter schools a possibility?

A: There’s always the possibility that the mission of some schools could be altered. People point to the Archdiocese of Washington, where they moved seven of their schools to the charter model. The Bronx is talking about doing that.

There’s a lot of work involved in a charter. Taxpayer funding precludes teaching religion and having prayer, but it (charter schools) can have a value-centered nature. We want to talk to Washington about that, talk to people who have charter schools; we don’t want to go into it haphazardly. It may take a while to answer our concerns before we approach someone about a charter school.

Q: Has the economic crisis increased the urgency of the situation?

A: It’s an obvious factor, but this has been an issue for diocesan schools around the nation for decades. The first study I saw for the Archdiocese of Baltimore dates back to 1976, and they were concerned about many of the same things that we’re concerned with now.

For the last two, three decades, we’ve been closing schools one at a time. We’ve condensed it so much; we could do some real damage regarding the Catholic presence in particular areas.

We have to manage our resources better, be stewards of our Catholic schools system. We can go on waiting for the next crisis to happen, or have a determined and planned way to ensure the existence of Catholic schools in our archdiocese.

Q: Dr. Andres Alonso, the CEO of Baltimore City Public Schools and a member of the Blue Ribbon Committee, recently announced a plan to close and reorganize schools. Is there any solace in the knowledge that taxpayer-funded schools are not immune to difficult decisions?

A: Absolutely, that confirms our need to take a serious look at our schools. We’re not the only ones looking at how best to serve our people. It affirms in some very clear ways what we ourselves are doing.

Q: Is there anything else you want to share with our readers?

A. Pray. I’d also ask folks who are my age (55) and older, if they value their Catholic school education, which in many ways was subsidized by the work of the sisters who worked for next to nothing and parishes, perhaps they would consider a donation to their area Catholic schools.