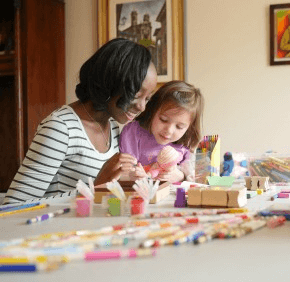 Suggest to a kindergartner that she give away her birthday presents to children in need, and those are the expected reactions.

Six-year-old Gabriela Huff is an outlier.

Soon after Christmas last year, her mother, Vanessa Niño, noticed that Gabriela had more toys than she could use, so she made the suggestion.

To her pleasant surprise, “Gabriela ran with it,” Niño remembered.

For her fifth birthday party, Gabriela asked her friends not to bring presents for her, but books and stuffed animals to be funneled to children in need.

They consulted the Internet for a local beneficiary and discovered The Tree House Child Assessment Center of Montgomery County, an organization dedicated to helping victims of child abuse.

At her party, Gabriela, her friends, classmates from St. Louis School in Clarksville and fellow parishioners of St. Louis drew pictures. In 37 purple drawstring bags, they placed a drawing, a stuffed animal and a book, launching the “Purple Sheep Project,” named for the color of the bags and Gabriela’s own prized stuffed animal, Cordero the sheep.

So began a tradition.

“I had no idea she was going to love it so much and want to do it this year,” Niño said.

For her sixth birthday in February, Gabriela and her team were even more successful than last year, filling nearly 100 bags.

“If the kids get hurt by the people that hurt them, they can come to the Tree House,” she explained in her confident, declarative voice. “They’re sort of like the poor – sort of.”

She expanded on her answer.

“That was beautiful,” Niño said.

Newman was moved but not surprised.

“When I started babysitting Gabriela, she was like that – so smart and so giving,” she said. “She’s always talking about Jesus.”

One of the more active 6-year-olds at St. Louis, Gabriela serves as an usher, and, according to Niño, puts her allowance in the poor box.

Nina Blecher, community outreach coordinator for The Tree House, joined Gabriela, friends and family at a recent Purple Sheep Project “drawing marathon.” She said that the kids her agency serves appreciate the gifts of love from their peers.

“It makes them feel better,” she said. “It’s a happiness factor.”

Niño, Gabriela and her father, David Huff, relocated to Silver Spring from Cincinnati a few years ago for Huff’s work as a construction manager. They were immediately drawn to the St. Louis Parish community – so much so that Huff, a former Lutheran, converted to Catholicism.

“I think my mother-in-law put it best,” Niño said. “She said that when she goes into Gabriela’s school, everybody smiles at her, greets her, opens doors for her. It’s that formation they’re giving the children – that’s what we really like.”