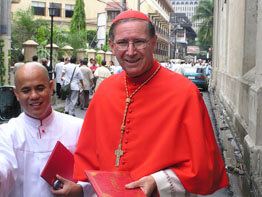 ST. PAUL – The church must supplement its ministerial programs with political advocacy if it is to meet the needs of the growing immigrant population in the United States, said Los Angeles Cardinal Roger M. Mahony.

Some people question the church’s role in politics or challenge the church’s position on immigration reform, but the church’s mission is not limited to people’s spiritual well-being, the cardinal said.

“Our concern is with the whole person and his or her human development,” he said Jan. 18 at an immigration conference at the University of St. Thomas in St. Paul.

The Jan. 18-19 conference was sponsored by the St. Paul Seminary School of Divinity and the Archdiocese of St. Paul-Minneapolis.

Catholics should form their opinions on immigration by considering the capacity of the United States to accept immigrants and the benefits immigrant workers provide to the nation’s economy, the cardinal said.

Cardinal Mahony called for a comprehensive immigration reform that addresses the root causes of migration, provides opportunities for undocumented immigrants to earn citizenship, reduces the time migrants and their families must wait to enter the country legally, and provides due process protection for immigrants.

“Current policy fails to account for the fact that in many ways our economy encourages the flow of illegal immigration into the country and is dependent on their labor,” he said.

“Present enforcement measures are tailored to stop immigrants at the border. However, once immigrants enter the country, we accept their labor and other contributions to our economy. This results in an incongruent policy in which migrants become subject to exploitation,” he added.

“To reap benefits from an immigrant labor force without providing opportunities for those workers to regularize their status is unjust,” Cardinal Mahony said.

Immigrants, especially Hispanics, are also transforming the makeup of the U.S. church, the cardinal said.

“These demographics require that the church give shape to new and expanded pastoral responses to meet the pressing needs of those newly arrived and for those who are in various stages of assimilation into our economic, political and social life,” said Cardinal Mahony, who has ministered to Hispanics and migrant farmworkers since the 1960s.

But pastoral programs and ministerial outreach are not enough, he added.

“We must also respond in the political realm through advocacy in local communities, state legislatures and Congress to ensure that our nation’s immigration laws protect human life and uphold human dignity in the face of changing circumstances,” he said.

Since the late 1980s, as many as 40 million immigrants, both documented and undocumented, have entered the United States, Cardinal Mahony said. “This era, from the late 1980s until now, marks the greatest level of immigration in our nation’s history.”

On Jan. 19, John Keller, a lawyer and the executive director of the Immigrant Law Center of Minnesota, updated the conference attendees on immigration-related legislation.

Keller, whose organization has assisted 20,000 immigrants and their families over the past decade, said about 12 million immigrants without legal status currently live in the United States. The process to obtain legal status can take anywhere from two to 20 years, he said.

“While I agree that no one should break the law,” Keller said, “if you put people in the situation of being separated from loved ones for 11 years, eight years, two years, I think it helps people who don’t understand the law to realize that these are really difficult choices for families.”

Bishop Jose Vera Lopez of Saltillo, Mexico, said that lasting solutions will not occur until economic inequalities that exist between the U.S. and Mexico are resolved and all members of society have access to fair and sustainable wages.

He said that at a recent meeting between Pope Benedict XVI and a group of Mexican bishops, the pope said that the U.S. and Mexican churches must work together to find a solution to the migration problem.

Because the migration problem is global in scope, it cannot be solved in isolation, Bishop Vera said.