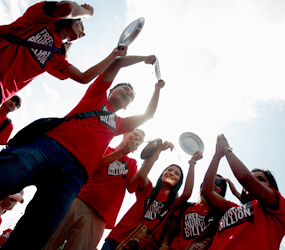 The current economic crisis has hit agriculture particularly hard, and governments and the world community must “make determined and effective choices” in investing in agriculture in the developing world, he said.

His comments came in a written message Oct. 16, World Food Day. The text was addressed to Jacques Diouf, director-general of the U.N. Food and Agriculture Organization.

According to the FAO, more than 1 billion people are undernourished and one child dies every six seconds because of malnutrition.

Those numbers have been on the rise because of soaring food prices, the global economic meltdown and a decline in aid and investment in agriculture, the U.N. agency said in a written report Oct. 14.

The pope said combating hunger by guaranteeing that everyone has access to a sufficient and healthy food supply would be “a tangible manifestation of the right to life, which, even though it is solemnly proclaimed, remains too often far from its full realization.”

The pope said, “More than a basic need, access to food is a fundamental right of every person and all peoples.”

But the current economic crisis has hit the agricultural world especially hard, he said, urging governments and organizations to provide “a sufficient level of investment and resources” for agriculture.

Any foreign aid must respect and protect local farming methods and avoid the inappropriate use of natural resources. Agricultural development must also respect rural life and “the fundamental rights of farmworkers,” he added.

Fighting world hunger also entails “changing lifestyles and ways of thinking,” as well as eliminating the structural causes that give rise to underdevelopment and food shortages, said the pope.

Building food security can be done by investing in roads and infrastructure, irrigation systems, transport, the organization of markets and agricultural technology that takes advantage of local resources and is sustainable in the long term, he said.