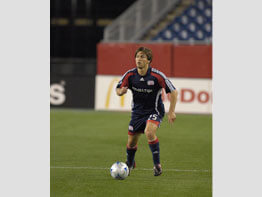 On July 14 he announced his retirement from Major League Soccer’s New England Revolution team to begin studies in August for the priesthood as a seminarian of the Diocese of Peoria. He will study at Mount St. Mary’s Seminary in Emmitsburg, Md.

“More than anything, I am excited to administer the sacraments, and to be with people at the most important times of their lives, like baptism, marriage and death,” Hilgenbrinck, 26, told The Catholic Post, Peoria’s diocesan newspaper, the day after his decision became public.

The national media quickly got a kick out of this soccer-to-seminary story.

Hours after his retirement and the reason for it were announced, Hilgenbrinck was interviewed by writers from The Associated Press and USA Today. When those stories appeared, interest in the story went international, with Hilgenbrinck soon fielding media calls from as far as England, Switzerland and Lithuania.

“It’s been amazing,” said Hilgenbrinck, who happily shares his story of faith not for personal recognition, but “to give glory to Christ.”

“I feel like God is blessing me, being able to witness to so many people,” said the athlete, a Bloomington native who began playing soccer at age 5.

A defender for his pro team, he honed his skills in grade school and high school before playing college soccer at Clemson University in South Carolina.

The Revolution was in first place when he left – fresh from a July 4 win over the Los Angeles Galaxy, which has world soccer celebrity David Beckham. But Hilgenbrinck is now content for the spotlight to shine elsewhere.

Hilgenbrinck considered his decision for years, but God’s calling intensified while he was out of the country playing professional soccer in Chile after graduating from Clemson in 2004.

“Being alone in another country, with a new culture and language, I did a lot of soul-searching,” he said. Through prayer and frequent reception of the sacraments, he strengthened his personal relationship with Christ and the fears and barriers surrounding his decision began to melt away.

Late last summer, while still in Chile, he made his first contact with Father Brian Brownsey, Peoria’s diocesan vocations director. The application process was begun via e-mail, and preliminary testing was done last December when Hilgenbrinck came to the U.S. He began mingling with diocesan seminarians at various events.

Hilgenbrinck signed briefly with the Colorado Rapids but was cut because of salary-cap issues. The day of his release, the acceptance letter to the Peoria seminarian program came from Bishop Daniel R. Jenky.

His agent, however, negotiated another MLS contract, this time with the New England team. When Hilgenbrinck learned the contract had an option for him to be released July 1 – about the time new seminarians needed to be in Peoria – he considered it yet another sign. As that contract expired, he told the team of his decision.

“We understand Chase’s decision to retire from soccer and pursue his mission of helping others and we support his desire to make this change in his life,” said Michael Burns, vice president of player personnel for the New England Revolution, in the team’s official announcement.

“Playing professional soccer has been my passion for a long time and I feel blessed to have successfully lived out this dream,” said Hilgenbrinck. “My passion now is to do the will of God, which is wanting only what he wants for me. Though I will miss the game of soccer, I know that I am moving on to something much greater.”

Hilgenbrinck is quick to credit his parents, Mike and Kim, for a strong upbringing in the Catholic faith. Since telling them of his decision to enter the priesthood, “they’ve been nothing but supportive and very loving and accepting,” he said.

Now he hopes to bring the same passion he had on the soccer field to serve God.

“When you play soccer you have to continue getting better every day,” he said. “It’s the same with faith. You have to improve every single day, search for opportunities to deepen your relationship with Christ.”

He will have many such opportunities at Mount St. Mary’s Seminary, where he will be one of 17 first-year seminarians for Peoria this fall. A bit of soccer may be in his future there as well.

Mount St. Mary’s fields a team that competes with area seminaries in an annual tournament called the Rector’s Cup. The rector is Monsignor Steven P. Rohlfs, a Peoria priest and former vocations director for the diocese.

“Monsignor Rohlfs liked the prospect of having me on his team,” said Hilgenbrinck.