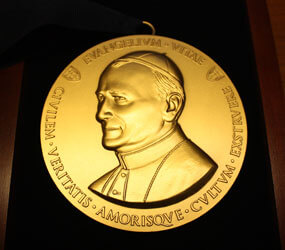 NOTRE DAME, Ind. – Looking back at 30 years of pro-life work for the Catholic Church, Richard M. Doerflinger said he sometimes felt he had come into “contact with something very close to ultimate evil.”

“I have to remind myself not to think of myself as fighting against evil people,” said the associate director of the U.S. Conference of Catholic Bishops’ Secretariat for Pro-Life Activities as he received the inaugural Evangelium Vitae Medal and its accompanying $10,000 prize at an April 28 banquet at the University of Notre Dame.

The medal honored Doerflinger for his “remarkable contributions” to the pro-life cause.

“In an age when the sanctity of life from its earliest to its final days is assaulted, you have courageously, tirelessly and quietly worked to build and sustain the ‘unconditional respect for the right to life of every innocent person,’ ‘one of the pillars on which every civil society stands,’ ” the citation read.

Quotations in the citation were taken from Pope John Paul II’s 1995 encyclical “Evangelium Vitae” (The Gospel of Life), for which the medal was named.

In his remarks after the medal was bestowed on him, Doerflinger quoted Aleksandr Solzhenitsyn, who said, “The line dividing good and evil cuts through the heart of every human being.”

“The (life) issues put us in touch with one aspect of humanity: They show what we are capable of when we lose our moorings, when we are not guided by clear thinking on right and wrong,” he said, calling the Catholic tradition “the only game in town if you wanted solidly grounded and consistent defense of the need to respect each and every human life.”

He said that those involved in pro-life work “tend to be religious people,” because they have “come to realize that only the grace of God could possibly be powerful enough to overcome the ways in which we insist on harming ourselves and others by acting out some very bad ideas.”

Those “bad ideas” include: promoting abortion supposedly to obtain freedom and equality for women; authorizing doctors to assist suicide allegedly to promote personal autonomy of suffering patients; and deciding that human embryos are expendable because they have few of the qualities we respect in a person, he said.

Universities, the government and the world need people who will see through “these facades of glittering words and superficially cultured thinking to see the sheer madness they have let loose into people’s minds and hearts,” Doerflinger said.

The Catholic Church, “with its respect for clear thinking and common sense” and “long tradition of careful moral reasoning and its patience with human frailty and our capacity for self-deception,” is the likeliest place to nurture people for this task, he added.

Doerflinger related that after 30 years of promoting the pro-life philosophy, he has come to realize that people who really investigate the evidence generally don’t find the pro-life message flawed. Rather, they realize how much their lives would have to change if they were to live by that message, so they rationalize continuing to live as they wish.

“Changing their lives, changing our society will require debates and arguments, but in the end, this struggle is not so much like winning a debate as like sparking a conversion, healing illness of the soul,” Doerflinger noted.

“So our critique of today’s bad ideas must always be expressed in love and accompanied by a tremendous willingness to reach out with compassion to those who are frightened, confused, desperate or alone – the victims, if you will, of the sexual revolution and of the revolution in modern thinking that gave us the crazy idea that it is our job to weigh different people and then decide who lives and who dies.”

Helping people turn away from bad ideas is part of the task of a great Catholic university, Doerflinger continued, saying that because Notre Dame relies on so many scholars and thinkers who embrace that task, “It is an especially great honor for me to receive this award.”

The Evangelium Vitae Medal given by the Notre Dame Fund to Protect Human Life will be presented annually to an individual who has made an outstanding effort to affirm and defend the sanctity of all human life.