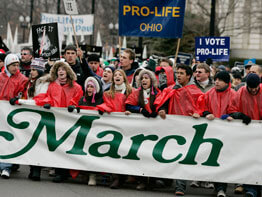 WASHINGTON – When the tens of thousands of participants at the annual March for Life returned to their homes, some after longer bus rides than others, many of them put away their placards, marching gear and talking points for another year.

But not all of them.

A number of the participants who traveled great distances and braved cold temperatures to come to Washington to voice their opposition to legalized abortion were ready to jump right back to volunteering, praying or working for the cause that brought them to the Jan.22 march in the first place.

Those who lobby in Washington for pro-life efforts were no exception – they certainly got right back to work after attending the march that marks the anniversary of the 1973 Roe decision legalizing abortion.

Two days after the march, Richard Doerflinger, associate director for the U.S. bishops’ Secretariat for Pro-Life Activities, told Catholic News Service that his office had a full slate of issues it planned to closely monitor in the months ahead.

For starters, the secretariat was supporting an amendment to the Indian Health Care Improvement Act expected to go before the Senate any day. The bill would restrict the federal funding of abortion through the Indian Health Service except to save the life of the mother, or in cases of rape of a minor or incest with a minor.

The federal agency is responsible for providing health services to American Indians and Alaska’s native peoples.

The U.S. bishops also are following an amendment to remove federal support for Planned Parenthood under Title X of the Public Health Service Act and working to ensure that pro-life language stays in current appropriation bills.

They also will be keeping a close eye on legislation involving embryonic stem-cell research.

Doerflinger, who has met with some members of Congress on this issue, said he has seen the “tone of the debate change” in recent months with legislators seriously considering options that would enable research while “avoiding moral controversy,” particularly through the use of human skin cells.

The U.S. bishops also will be following a bill to ban the creation of human-animal hybrid embryos for research. In mid-January, a similar ban was rejected by England’s House of Lords.

According to Doerflinger, some researchers seem to be following the reasoning that if a process is “technologically possible, it must be acceptable.”

On the positive side, he said the secretariat also was hoping to see passage of the Pregnant Women’s Support Act, introduced in the Senate in December and the House earlier last year.

Kristen Day, executive director of Democrats for Life of America, the group that helped craft the legislation, said her “No. 1 priority” is to see Congress pass the legislation designed to ultimately reduce the number of abortions.

Day told CNS Jan. 24 that Democrats for Life would likewise be monitoring pro-life language in appropriation bills, stem-cell research measures as well as giving their input on the Democratic Party’s platform. At the very least, she said, they would like the platform to include “conscience language” that has previously been incorporated in the platform stating the party’s respect for the conscience of each American on the issue of abortion.

Douglas Johnson, legislative director of the National Right to Life Committee, told CNS Jan. 23 that his office spent a fair amount of time last year simply defending pro-life positions in legislation and he expected this year to be more of the same.

He said there would not likely be legislation in Congress this year promoting abortion, because the congressional leadership wouldn’t “want to stir things up” before the election.

“For tactical reasons,” he added, “they do not wish to have pitched battles over abortion policy” right now.

But that doesn’t mean the presidential candidates are shying away from it or that future policies won’t be determined by the election’s outcome.

If a Democratic candidate is elected president, Johnson said, all current anti-abortion legislation “would be on the chopping block” because the Freedom of Choice Act, supported by the major Democratic presidential candidates, would “sweep the board clean.”

The legislation, which would prohibit states from placing limits on abortion, was initially introduced during the Clinton administration and reintroduced last April immediately after the Supreme Court ruled that the federal ban on partial-birth abortion is constitutional.

Although Johnson hailed the Supreme Court’s ruling in a joint decision in Gonzales v. Planned Parenthood and Gonzales v. Carhart, he also noted that the 5-4 decision proves how tenuous the court is on abortion issues.

“We’re on the cusp here,” he said, adding that when the next president picks a new justice for the Supreme Court, the appointment will either “build a majority to re-establish protection for the unborn” or will establish a court that is “extremely hostile to pro-life legislation.”

“There is a lot riding on the political events this year,” said Johnson, matter-of-factly.

But while he awaits election outcomes, he said he has plenty of reason to be optimistic, citing the recent report on the overall decline in performed abortions and polling data showing “a stronger pro-life sentiment in younger people.”