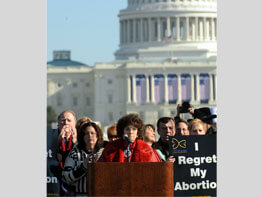 WASHINGTON – President Barack Obama and his vocal support of abortion came under fire from members of Congress, clergy and pro-life activists during the opening rally of the 36th annual March for Life.

For nearly two hours Jan. 22, a crowd estimated at 100,000 listened to three dozen speakers pledge to fight efforts to expand the availability of abortion and to oppose any increases in federal funding for agencies that perform abortions.

The crowd’s disdain for President Obama’s views on abortion offered a sharp contrast to the exuberance that nearly 2 million people showered on the 44th president at his inauguration on the very same grounds 48 hours earlier.

Speakers took an almost defiant stand against the new president in pledging to reverse the 1970s era Supreme Court decisions of Roe v. Wade and Doe v. Bolton that recognized abortion as a constitutional right and overturned state laws against abortion.

Rarely mentioning President Obama by name and referring to him repeatedly as “Mr. President,” Nellie Gray, president of the March for Life Fund which annually sponsors the march, invited the nation’s first African-American leader to discuss “important changes” in his stance “and we want to discuss that today.”

To become a president of all people, as he has pledged, Ms. Gray urged the president to take steps to end legal abortion during his presidency.

“Mr. President, you are a great orator, and we appreciate the great words … but you must also be a great doer of the deeds to overturn the illicit Roe v. Wade and fulfill your responsibility to make right and proper changes as president of the United States and president of all the people,” she said.

President Obama issued a statement Jan. 22 saying the Roe decision stands for the broad principle that “government should not intrude on our most private family matters.”

The president reiterated his position that he is “committed to protecting a women’s right to choose” and called for both sides to work toward common ground to prevent unintended pregnancies, reduce the need for abortion, and support women and families in the choices they make.

More than two dozen Republican members of Congress also were on hand, speaking a total of 45 minutes about their plans to introduce legislation to limit funding to agencies performing abortions, overturn Roe v. Wade or to fund programs that support pregnant women, giving them a better chance of carrying their children to term.

Several of the elected officials called abortion a civil rights issue, drew parallels with slavery and urged the crowd to maintain their courageous stance opposing abortion.

Rev. Luke J. Robinson of Quinn Chapel A.M.E. Church in Frederick, Md., an African-American, recalled the celebration during the week leading up to the March for Life, including the Jan. 19 holiday marking the 80th anniversary of the birth of the Rev. Martin Luther King Jr. and Obama’s inauguration Jan. 20.

He said having Obama as president marks a partial fulfillment of Rev. King’s dream of equality for all and a more just society.

As the jubilation of the week subsided, Rev. Quinn called for a change in the nation’s abortion policies and urged Obama to be that agent of change.

“I am praying that God’s hand will lead him in righteousness and justice,” he said. “Today, Thursday, Jan. 22, we come here to deal with some unfinished business as it relates to the dream. We need change now more than ever.

“We are calling on the president of change to be an agent of change as it relates to the lives of more than 1 million children who will be slaughtered in his first year as president of the United States by a horrible injustice called abortion,” he said.

Paraphrasing the president’s speech, Mr. Dornan said, “We will not apologize for our way of life – I add our love of life – nor will we waiver in its defense. And for those who seek to advance their aims by inducing terror – the terror of abortion – and slaughtering innocents, we say to you now our spirit is stronger and cannot be broken. You cannot outlast us and we will defeat you.”

“I add we will defeat you,” Mr. Dornan said, the pitch of his gravelly voice rising, “and defeat the culture of death or we will perish as a nation.”