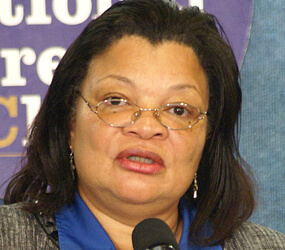 WASHINGTON – Despite their support for health care reform in general, representatives of the National Black Pro-Life Union and the American Association of Pro-Life Obstetricians and Gynecologists said Aug. 18 they could not endorse any current health care reform proposal in its entirety.

They said they object to the fact that no health reform measure specifically forbids funding for euthanasia and abortion.

Joining their opposition was Alveda King, director of African-American outreach for the Catholic organization Priests for Life, who said she cannot begin to think about backing a health care bill until those issues are explicitly disallowed in the legislation.

King, the niece of the Rev. Martin Luther King Jr., and the others were among pro-life leaders who spoke at a press conference at the National Press Club in Washington.

“Does America believe that life with dignity should last from the womb until the time of natural death?” King asked. “That’s the question we’re playing with.”

U.S. pro-life advocates, including the Catholic bishops, have said any health care reform measure must include coverage for all people from conception until natural death, continue the federal ban on funding for abortions and preserve conscience protections for doctors, nurses and other health care workers.

Another speaker at the press club, Dr. Donna Harrison, a physician who is president of the American Association of Pro-Life Obstetricians and Gynecologists, said without an abortion and euthanasia exclusion, health reform would directly conflict with the oath every doctor takes not to harm his or her patient in any way.

She said she was confident many physicians across the country would step down from their position if such a measure became law.

Bishop Harry Jackson, who is a nondenominational pastor, added that faith leaders will not accept “the plan as it has been presented” because it “is grossly immoral” and “absolutely ungodly.”

Harrison cited a poll that surveyed multiple organizations, including the Catholic Health Association, which showed 89 percent of practicing physicians said they would quit their jobs before being forced to intentionally destroy human life.

According to Harrison, Catholic doctors make up almost one-sixth of the nation’s doctors, and if they, as well as many doctors in rural parts of the nation, left medicine over this issue, she wondered whom Americans would be left with for medical care.

In Washington alone, he said, 41 percent of all pregnancies are terminated by abortion and black women account for 75 percent of those abortions.

Gardner attacked organizations such as Planned Parenthood, the nation’s largest abortion provider, for placing their centers disproportionately in urban or minority neighborhoods, saying abortion had become a “big business.”

“Abortion has become the number one killer of black Americans,” she said, predicting the number of African-American fatalities because of abortion would skyrocket if health care reform allows abortion coverage.

Without specifying the organization, he said he has a faith-based health savings account which he found after losing employee health coverage. He said the new plan gives his family of five more coverage for less money – a bonus for any family living in the Washington area with a combined income of less than $60,000.

On the issue of abortion and health reform, he said he was not alone in wondering whether President Barack Obama himself would have been born if his mother had had easier access to an abortion as a teenage girl and had not birthed a child out of wedlock.

“Raising children will always be more work than killing them,” Nelson said, “but it will also be more rewarding.”

King said she knows many who agree morally with the views expressed at the press conference but who worry how mothers will cope with unplanned children and how the nation will handle an influx of youngsters. But she suggested that someone like Laurie Carter, director of Care Net’s Underserved Outreach program, can offer help to these mothers.

Carter’s initiative strives to develop pregnancy centers for mostly ignored communities and to meet every woman at her “point of need.”

Women’s reproductive rights should no longer be viewed as a woman’s right to have an abortion, but as something to validate every mother, said Carter, who was at the press conference.

She criticized “old thinking” which suggests children will stop a woman from being successful. Carter said she thinks this is not the way America works today and women, even if they are mothers, can still pursue all their dreams.