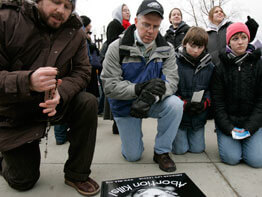 WASHINGTON – Pro-life activities in California, Washington, Pennsylvania, Illinois and the District of Columbia, among other places, highlighted the continuing opposition in the United States to legalized abortion.

On Jan. 20, more than 700 gathered in St. Joseph Cathedral in San Diego for a prayer and procession against abortion, led by San Diego Auxiliary Bishop Salvatore Cordileone. The procession stretched out for three city blocks.

Thomas McKenna, president of Catholic Action for Faith and Family, which organized the event, called it a “procession of reparation” to decry the Jan. 22, 1973, Supreme Court decisions in Roe v. Wade and Doe v. Bolton that legalized abortion.

The court’s Roe decision threw out most state restrictions on abortion, while the Doe decision permitted abortions through all nine months of pregnancy.

In Washington state, the 30th annual March for Life drew thousands to Olympia, the state capital, Jan. 22. The march crowd was estimated to be larger than in past years, possibly because of the Jan. 12 death of Kathy McEntee, the march’s organizer. She suffered a stroke.

McEntee’s daughter, Noreen, who succeeded her as president of Washington State March for Life, told the crowd, “She died far too soon, but we are here to carry on her cause.”

Close to 200 gathered Jan. 18 in front of Philadelphia’s City Hall for an annual “Stand Up for Life” rally sponsored by the Urban Family Council, the Pro-Life Union, the Alpha Pregnancy Center and Generation Life, an organization of young people spreading pro-life and chastity messages to their peers.

“We are there to make a stand for all the deaths that are happening in Philadelphia, and to let our newly inducted mayor and other city officials know that we would like to see the policies in Philadelphia change and start respecting life,” said Judi McLane, Generation Life’s director.

Twenty parishes in the Archdiocese of Chicago had prayer vigils or other events scheduled Jan. 16-29 to observe the 35th anniversary of the legalization of abortion. A Jan. 20 march was held in downtown Chicago following an afternoon Mass at Holy Name Cathedral. It was the third annual march.

A statement issued Jan. 22 in Chicago by Denise Burke, Americas United for Life vice president and legal director, said: “Until all the pieces are in place to make the overruling of Roe a realistic possibility and until the truth has replaced misinformation about abortion, laws that put fences around the abortion license and highlight the negative impact of abortion on women are imperative.”

National Right to Life Committee president Wanda Franz took note of a report released earlier in January by the Alan Guttmacher Institute, the research arm of Planned Parenthood, citing a continued decline in the number of abortions. For 2005, the number was 1.2 million, down 25 percent from the peak of 1.6 million in 1990.

“We are heartened by and thankful for the growing number of women that are rejecting abortion and choosing life for their child,” Franz said in a Jan. 22 statement.

She also noted that three states joined the list of those requiring a woman seeking an abortion to view an ultrasound image of her unborn child. There are now 11 states with such laws. “We know that if women are fully informed about the abortion procedure, the development of their child, and the life-affirming alternatives in their area, they are far more likely to reject the idea of abortion,” Franz said.

“They want Hispanics to believe that they are pro-family, but at every turn they fight efforts to keep Latino parents informed before their minor daughters are about to undergo an abortion,” Rojas said.

“The abortion industry claims to be pro-woman, yet they argue against laws that ensure a Latina woman’s right to know what abortion is, what abortion does to her unborn child, as well as the long-term effects of abortion and the link between abortion and breast cancer,” he said.

At the press conference, Amanda McClone, an advisory board member of National Teens for Life, lamented the losses wrought by 35 years of abortion.

The nearly 50 million babies estimated to have been aborted since 1973 “are not just a terrible statistic,” McClone said. “They were our brothers and sisters, cousins, nieces and nephews. They were our friends and even future spouses.”

Contributing to this story was Nadia Maria Smith in Philadelphia.