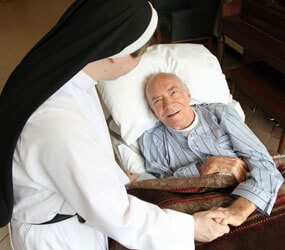 WASHINGTON – A new report from the Institute of Medicine declares that transforming the way pain relief is provided for Americans must become a national priority.

But for Maria Gatto and others like her in Catholic health care, providing relief from pain – whether it is physical or mental, emotional or spiritual – has been a priority for years.

Gatto, a nurse practitioner specializing in palliative care and director of palliative care for Trinity Health in Farmington Hills, Mich., is leading an effort throughout the fourth-largest Catholic health system in the United States to bring team-based interdisciplinary care that eases suffering to the bedside of every patient.

The Institute of Medicine report, titled “Relieving Pain in America: A Blueprint for Transforming Prevention, Care, Education and Research,” was commissioned by the Department of Health and Human Services as part of the 2010 Patient Protection and Affordable Care Act.

It found that chronic pain affects an estimated 116 million American adults and costs the nation somewhere between $560 billion and $635 billion each year in additional spending for medical care due to pain and lost productivity among workers.

“Pain is a major driver for visits to physicians, a major reason for taking medications, a major cause of disability and a key factor in quality of life and productivity,” the report said. “Given the burden of pain in human lives, dollars and social consequences, relieving pain should be a national priority.”

“This is everything palliative care has been preaching for years,” Gatto told Catholic News Service in a telephone interview July 14. And palliative care can be summed up, she added, as what “Catholic health care has always supported as its mission – holistic, patient-centered, family-centered care.”

Among the hundreds of patients she has treated during 26 years of nursing experience, Gatto recounted one case that brought home the importance of palliative care – not just to the patient but to family members and medical professionals.

“I had a physician come to me in my palliative care service and say he was having difficulty trying to communicate to a family about their mother’s terminal diagnosis and bringing them together to make the difficult decisions that needed to be made,” she said.

The physician told Gatto, “I’m trained to save lives and I don’t know how to do this.”

The patient’s family entered a meeting convened by Gatto with the words, “We’re not here to stop anything,” implying that they believed the goal of hospital staff was to end medical treatments for their mother as quickly as possible. Instead, Gatto’s words stopped them in their tracks: “My job here is to do everything for you.”

At the lengthy meeting that followed, the family and hospital staff members exchanged information about the patient’s life story, as well as her diagnosis and prognosis. “At the end of the discussions, they had tears in their eyes,” Gatto said. “No one had actually sat down and told them the truth.”

The family then asked Gatto to sit with them and their mother as she told “me and her family what she wanted to be done for her.” The woman expressed her wish “to always be kept comfortable and pain-free and to go home and have family around her” – which the hospital was able to do.

“The family was so grateful because it was done their way and with their choices,” she said.

But palliative care is not necessarily end-of-life care, and a recent poll showed that both physicians and health care consumers are unclear about when such care might be appropriate.

The margin of error for the survey was plus or minus 3.46 percentage points.

The survey and follow-up focus groups also found that “physicians tend to equate palliative care with ‘hospice’ or ‘end-of-life’ care, and they are very resistant to believing otherwise,” Public Opinion Strategies reported. “Although these physicians say they have referred patients to palliative care services, they admit they only do so when it is end-of-life care.”

Palliative care can be for anyone with a chronic illness or advanced disease. Services are provided by an interdisciplinary team that may include a registered nurse, social worker, pastoral care coordinator, volunteers and even such comfort-care specialists as massage therapists and musicians.

According to the New York-based Center to Advance Palliative Care, about 63 percent of all U.S. hospitals with more than 50 beds have a palliative care program today.

Gatto, who previously was director of palliative care for Bon Secours Health System in Marriottsville, serves on the board of the Supportive Care Coalition, made up of 20 Catholic health care organizations and dedicated to “pursuing excellence in palliative care.”