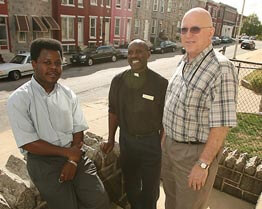 The Congregation of the Holy Spirit priests hope their presence in the neighborhood will spur community activism and refresh a region of the city that is littered with boarded-up houses, broken-down cars and trash-strewn streets.

With the aid of parishioners and the greater Catholic community, St. Edward pastor Father Evod Shao, C.S.Sp., spearheaded the renovation of the 127-year-old West Baltimore parish’s dilapidated former convent building to make it livable for him and two other priests in his religious community.
With two levels of the three-floor building habitable, Father Shao moved into his new digs at the end of September and the two others expect to call the Lafayette Street address home by Dec. 1.

“I’ve lived in Chicago in a difficult area, but not in a neighborhood quite this bad,” said Father Christopher Promis, C.S.Sp., who works at the Catholic Relief Services world headquarters in Baltimore. “Obviously, there is a concern for our safety, but we’ll take precautions. We’re hoping our involvement in the neighborhood will inspire the residents to become invested in the community and make it a better place to live.”

As pastor of St. Edward, Father Shao wanted to live in the community he serves and it made financial and logistical sense to have the two priests with whom he shared an apartment move into the 84-year-old convent that hadn’t been occupied by the sisters in about 30 years.

The biggest obstacles were money and labor for the renovation.
For a project that should have cost roughly $250,000, the parish only put out about $1,000 for the ongoing renovations, said Noland McCoy, director of the division of facilities management for the Archdiocese of Baltimore.

“These people are good Catholics who believed this was a good investment in this particular community,” he said. “This is a miracle you are looking at from generous activists.”

The troubled neighborhood was an eye-opening experience for Father Gerald Kasule, C.S.Sp., chaplain for both The Seton Keough High School in Baltimore and The Cardinal Gibbons School in Baltimore, who arrived in this country from his native Uganda earlier this year.

“I’ve lived in different parts of Europe and Africa, so I thought I had experience in urban difficulties, but I wasn’t expecting this,” Father Kasule said of the neighborhood crime statistics that include robberies, drug trafficking and murder. “I’m ready to immerse myself into the community, get to know the youth and find out how we can help the people here improve their lives.”

As the three Spiritan priests plunge into the community of their new abode, they also hope their efforts build the congregation of St. Edward, which now has about 240 registered parishioners, said Father Shao, a native of Tanzania.

Work will continue on the new priests’ residence until the third floor is completed as funds and volunteers become available, Mr. McCoy said.
“Making improvements to the building also brings new life to the neighborhood,” Father Shao said. “It’s also allowing us to move in to breathe new life into the community.”