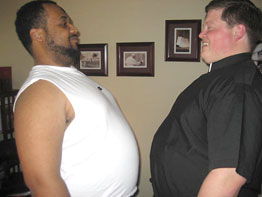 Similar to television’s version of “The Biggest Loser,” a priest and a youth minister are going head to head – or in this case stomach to stomach – in the St. John’s Largest Loser weight-loss contest not only to benefit charities of their choice, but their health and wellbeing as well.

Wayman A. Scott IV, youth minister at St. John the Evangelist, Columbia, and Father Matthew Buening, associate pastor of the parish, have agreed to lose a total of 90 pounds while raising money as sponsors donate $1 per pound.

The first weigh-in took place Ash Wednesday with the scale tipping to 297 pounds for the 5-foot-10 inch Mr. Scott, and 272 pounds for 5-foot-9-inch Father Buening.

“I thought I weighed 280,” said the five-year youth minister who conceived the notion for the contest. “I was in a state of shock. I told him (Father Buening) we look like the Alfred Hitchcock silhouettes!”

Mr. Scott, 29, admits his eating “was getting out of hand,” sometimes eating two dinners a night or visiting fast-food restaurants at 1 a.m. Now he’s eating better and moderating his food intake.

Years back, the friends attended the same elementary school, even facing the same bullies.

“Now the bully is weight,” said Mr. Scott, “and we’re teaming up against bad health.”

Lent seems like the ideal season to discard pounds according to Father Buening, 31, as the contest is combining three Lenten traditions: “fasting, almsgiving, and I’m certainly praying!” he said.

He said “powerful stats” exist indicating priests commonly experience some health problems. “I was at one time in really good shape. I hope some priests can see this and realize it’s so important to take care of ourselves if we’re going to take care of the people of God.”

The St. John’s Largest Loser contest will end on May 18, one week after Pentecost. The loser will have to dye his hair or shave it bald. They are working on the color.