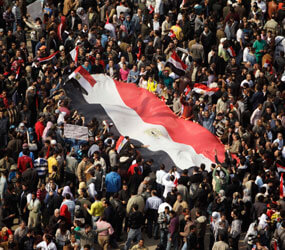 VICTORIA, Texas – Trinitarian Father Alfonso Serna, who spent the first year after his 2009 ordination ministering in Egypt, said he is not sure whether a regime change in Egypt will help the minority Christian population there.

“I hope and pray that the change will bring a better situation for our fellow Christian brothers,” Father Serna said. “However, much, or very little, might happen.”

Egyptian President Hosni Mubarak stepped down after more than 29 years of rule Feb. 11, following more than two weeks of mass protests in Cairo, the capital, that spread to other Egyptian cities.

Father Serna, who now lives in the rectory at St. Lawrence Martyr Parish in Hanover, is the priest chaplain at St. Joseph Medical Center in Towson. He said he has put his hopes in papal intentions for a positive result to the tumult in Egypt.
“Pope Benedict XVI has been promoting freedom of religion,” Father Serna said. “I add myself to such an important right and principle. My contribution has been the ministry of presence and support among the persecuted church. I hope and pray that a positive impact for the Christian community in Egypt may be an outcome of this current situation.”

Regarding how he was treated being a Christian in a Muslim-majority nation – about 90 percent of Egypt’s population is Muslim – Father Serna told The Catholic Lighthouse, newspaper of the Victoria Diocese, in an e-mail interview that he never felt threatened.

“I never had such an experience. I learned that my presence, as a religious priest there, was compromised in a way, but I also learned that the very fact of being a foreigner, gave me a different ‘Christian status,’“ said Father Serna, who was ordained in Victoria and now is serving in Maryland.

Out of respect for members of other faiths, he and other Catholic priests in Cairo did not wear clerical garb except when celebrating Mass, Father Serna said.

He learned how to drive in Cairo and then outside of the city. This opened possibilities for him to explore sites throughout Egypt, such as Alexandria and Suez.

“I also made friends in the different churches where I was invited to serve and celebrate Mass,” he said, “for example, the Franciscan cathedral in downtown Cairo, St. Mark’s Church in Shubra, the basilica in Heliopolis, Holy Family (Church) in Maadi, where I served the Hispanic and Filipino community, and the Coptic Catholic cathedral in Medinet Nasr,” which served the neighborhood to which Father Serna was assigned – one of Cairo’s poorest.

His principal ministry was to 500 Latin-rite Sudanese Catholic families who had fled Southern Sudan for Cairo during the civil war that had engulfed their homeland.