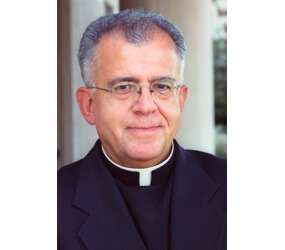 WASHINGTON – Colleagues of Archbishop-designate J. Augustine DiNoia said they were pleased with his new appointment at the Vatican, calling him an “incredible theologian” and a man with a “brilliant mind” who can engage others in liturgical and theological discussions.

Pope Benedict XVI named the U.S.-born Dominican an archbishop and the next secretary of the Congregation for Divine Worship and the Sacraments June 16. He has worked at the Vatican Congregation for the Doctrine of the Faith since 2002.

Archbishop-designate DiNoia, known for his expertise in liturgical and doctrinal affairs, was praised for his knowledge as well as his warm personality.

News of the Vatican announcement spread quickly in the Dominican order’s St. Joseph province, based in New York, to which Archbishop-designate DiNoia belongs.

Dominican Father Brian Mulcahy, provincial vicar, said he and his fellow Dominicans were “absolutely thrilled” by the appointment.

“We see it as not just an honor for us, but for the order as a whole,” said Father Mulcahy, who studied systematic theology under the archbishop-designate at the Dominican House of Studies in Washington.

Father Mulcahy, who worked at the Congregation for the Doctrine of the Faith from 1992 to 1994, described his former professor as a man with a brilliant mind who engaged his students “with great ease and great love” in the “theological patrimony of the church.”

“When he is on, he is one of the finest teachers of the Catholic faith that one would ever want to meet,” he told Catholic News Service in a telephone interview. “As a preacher, a teacher of the faith, he is almost without parallel.”

Cardinal Francis E. George of Chicago, president of the U.S. Conference of Catholic Bishops, said the appointment of Archbishop-designate DiNoia is a “matter of pride” for the U.S. church and the Dominican order.

Noting that the archbishop-designate formerly worked in the Secretariat for Doctrine at the USCCB, Cardinal George said in a statement that the bishops are grateful that the Dominican is bringing his talents to the Vatican for the benefit of the church around the world.

Archbishop-designate DiNoia left his position at the bishops’ conference to become director of the Intercultural Forum for Studies in Faith and Culture, a Catholic think tank at the Pope John Paul II Cultural Center in Washington. In 2002 he was named undersecretary of the Congregation for the Doctrine of the Faith in 2002, where he worked under then-Cardinal Joseph Ratzinger, now Pope Benedict.

His expertise also will help in the months ahead as the church prepares to implement the third edition of the Roman Missal, Bishop Serratelli said.

The U.S. bishops are expected to vote on the remaining sections of the missal, which will contain new English translations of the prayers in Mass and other formal liturgies, at their June and November meetings. Afterward, the Vatican congregation where Archbishop-designate DiNoia will become secretary must give “recognitio,” or confirmation, of the final translation as well.

Archbishop-designate DiNoia will assume his new responsibilities after his episcopal ordination July 11 at the Basilica of the National Shrine of the Immaculate Conception in Washington.