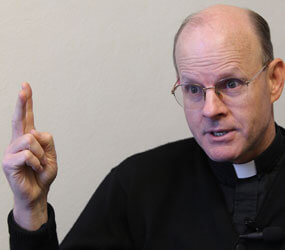 BURLINGTON, Vt. – A priest-psychologist said he sees “signs of grace” amid the darkness of the clergy sexual abuse crisis.

Monsignor Stephen Rossetti, clinical associate professor of pastoral studies at The Catholic University of America, said one positive outcome of the abuse crisis has been the continued implementation of the U.S. bishops’ 2002 document the “Charter for the Protection of Children and Young People.”

He called it “a miracle of grace the charter is still strong and so insightful.”

Monsignor Rossetti made his remarks May 2 in a keynote address at the National Safe Environment & Victim Assistance Coordinator’s Leadership Conference in Burlington.

The priest, former president and CEO of St. Luke Institute, a treatment center in Maryland for priests and religious with addictions or psychological problems, was a consultant to the U.S. Bishops’ Ad Hoc Committee on Sexual Abuse that drafted the charter adopted by the bishops at their Dallas meeting in 2002 and revised three years later.

The charter and its norms are meant to put a comprehensive system in place to address and stop abuse. Monsignor Rossetti said the document “continues to hold up over time.” But he also noted that it is “not the last word.”

He said just as the church and society continue to grow in their understanding of abuse, the charter will also continue to evolve, “but its spirit and principles stand firm and guide us.”

Addressing those involved with implementing the charter at the diocesan level, he urged them to recognize that the “vision of the charter is not behind us. It is in front of us.”

“We have not fully realized all that is in this simple little document,” he said, but added that one of its positive outcomes is the “plummeting rates of child sexual abuse in our church over the past 20-plus years.”

“From where I sit, there is no body or institution that has a more far-reaching child protection program than the Catholic Church in the United States,” the priest noted, saying those involved in this work should “be proud of what has been accomplished. The church in this country does not get the credit it deserves for this far-reaching program.”

But the problem is far from over, he said, which is obvious each time clergy sexual abuse cases make headlines.

“Passing a few laws is relatively easy; changing hearts requires a long, and at times, agonizing process,” he added.

The priest pointed to some elements of progress, noting that the church today “is a much safer place” and is “better at weeding out potential abusers before they are ordained.” He also said new priests are being educated more “diligently and carefully, especially in the area of human sexuality and personal boundaries.”

“The culture of silence in our church is breaking down. The church is no place for molesters and this evil to hide any longer,” he added.

But among the setbacks, he said there is “no excuse for our not dealing with perpetrators better.” He also said he did not understand “why every diocese does not immediately report all allegations of this crime to public law enforcement officials, no matter how long ago the abuse occurred.”

Monsignor Rossetti said the problem of abuse in the church will only end when the church fully advocates for abuse victims.

“We must be the ones who demand that children be first and their safety our first concern,” he said. “We must lean down and strain to hear their voices. Then we stand up, and tell the world what they have said.”