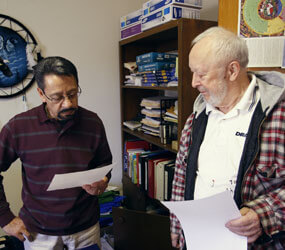 POSTVILLE, Iowa – Father Paul Ouderkirk has a nice house in northeastern Iowa where he was living in comfortable retirement, overseeing the banks of, as he calls it, “the mighty Missi-Sloppy.”

In the past year, though, the priest, who celebrated his 50th anniversary of ordination April 26, has seen that house very rarely, he admitted. “I barely get to see my family – barely, barely, barely,” he added.

Father Ouderkirk, the pastor of St. Bridget Parish in Postville until he retired in 2004, returned to the parish a couple of times each month afterward to celebrate Mass in Spanish for a predominantly Mexican and Guatemalan congregation made up of workers at the Agriprocessors meatpacking plant in Postville and their families.

“I thought all this was behind me. I bought my own home. And then all this happened,” mused the priest during an April 22 interview with Catholic News Service. He wore a white golf shirt with the words “Justicia Ahora” (“Justice Now”) scrawled on the front with a black marking pen.

The start of “all this” was the federal raid last May at the plant – one of the biggest such raids in search of illegal immigrants – with 389 arrested, and charges levied against more than 300 of them related to immigration law, including identity theft.

Father Ouderkirk recalled being at a conference when a fellow priest approached him and asked, “Did you hear what happened at your old parish?” He had not heard – and even once he did, he had no idea of the impact that the raid would have on the town in general and its immigrant population in particular.

He returned to St. Bridget two days after the raid to marshal what support he could among parishioners and other Postville residents to aid the Agriprocessors workers. For nearly a week, families were sleeping in the church and the social hall because they were terrified at the prospect of being arrested in the street or in their residences.

Father Ouderkirk said he told them they had to go back to their homes because worshippers were going to be at the church for Mass that first post-raid Sunday, but that they could call him if they ran into any trouble.

“No one called,” he told CNS, and that began a period of some things settling into a routine, but something far from normalcy.

When news spread about worker mistreatment and working conditions inside the world’s largest kosher meatpacking plant, donations poured in to St. Bridget Parish to help the workers and their families. Father Ouderkirk pegged the total at $1 million.

Even with the donations, the work became so stressful that Father Ouderkirk had to see his doctor about chest pains. “When you deal with a fruitcake agency like (the federal Department of) Homeland Security,” he said, “you’ve got to be a little angry.” The physician diagnosed stress and gave the priest some pills. Father Ouderkirk said he threw the pills away and prayed more.

This year, when the same doctor conducted a physical, he noticed that Father Ouderkirk’s stress levels were way down, but his weight was up 11 pounds. “If you ate black beans every day for lunch like I have, you’d put on 11 pounds, too,” he told the doctor.

Immigrant women from the parish have made lunch for Father Ouderkirk and the St. Bridget staff and volunteers every day since the raid, in thanks for the parish’s assistance.

One critical factor in the aid effort, he said, was to have “a top-notch, bilingual staff.” While some volunteers mainly speak either English or Spanish, two key parish staffers – Paul Rael, the Hispanic minister hired by Father Ouderkirk in 2003, and Violeta Aleman, brought onto the staff since the raid in an intake counselor’s role to help workers and their families – are fully bilingual.

Father Ouderkirk and the St. Bridget staff are still helping Postville’s immigrants, but have been fixing their eyes toward a first-anniversary interfaith prayer service at the church May 12.

“Nobody’s going to be speaking a very long time,” he said of the invited clergy and lay speakers. “We’ve got some praying to do.”