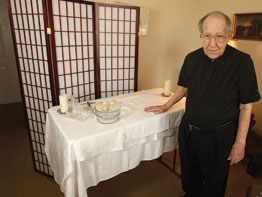 At 93, Father Huesman still feels a strong need to say daily Mass. Since the Mays Chapel Ridge complex hasn’t provided chapel space for him to do so, the priest has decided to hold Mass in his small apartment, needing at least one person in attendance.

The senior hasn’t yet started a daily 4 p.m. Mass, but everything is ready. A waist-high table covered with a white tablecloth sits in the middle of his living room, and a nearby gallon of white “Angelica” altar wine stands ready on the credenza. The homemade altar holds the necessary liturgical accoutrements, including a gold chalice encased in a brown box, which his parents presented to him for his June 13, 1941, ordination.

“All retired priests say Mass,” said the sharp-minded Father Huesman with a bright glint in his eyes. “I don’t have to, I need to. I need to say daily Mass.”

He pointed to a three-panel dressing screen against the wall.

“You know what’s behind that screen?” he asked. “That’s where the Lord is.”

Sure enough, behind the wooden screen sits a solitary small table holding a white metal tabernacle with the Eucharist inside and a key dangling from the lock below a plain gold cross.

Currently, Father Huesman celebrates Mass for about 30 people Saturday nights in the community room of the independent living facility, and offers Communion to the sick in their rooms. The priest has lived there for about four years.

Father Brian M. Rafferty, pastor of Our Lady of the Chesapeake, Lake Shore, said of his friend, “His greatest love is the priesthood.”

The two met in 1950 when Father Rafferty was in eighth grade.

“We have been great friends ever since,” said Father Rafferty. “I have been blessed with many great mentors over the years, but in the words of The Book, he ‘has surpassed them all.’”

Many retirees enjoy traveling or participating in social clubs and groups, like those offered at Mays Chapel Ridge. This senior, however, spends much of his time praying, he said, as he showed off his original Liturgy of Hours red prayer book.

“Praying for myself,” he said, “for family, for whatever the community needs, for victims of natural disasters – I pray for the world – it’s going to pot!”

He is most proud of founding the Harbel community organization while pastor of St. Dominic. The organization, still thriving today, works to improve and find solutions for Harford Road neighborhoods.

At Ascension, he built a new church in the early 1980s and was chaplain of the Good Shepherd Center for troubled girls. Wanting to stay connected, he visits there once a month to hear confessions.

“Where can you find (non-Catholic) teenagers who go once a month to confession?” he asked, his gold-rimmed glasses sitting on a smooth pale face.

Not many wrinkles have accompanied the priest in his nine decades.

“Father Rafferty used to introduce me as ‘the old man who was ordained at The Last Supper!’” he said.

Not quite, although Father Huesman, who retired in 1999, is the third oldest living priest in the archdiocese, behind Monsignor Myles J. McGowan and Archbishop William D. Borders, both born a year before in 1913.

“‘Uncle’ Jerry is as sharp as a tack,” Father Rafferty said. “He can chat knowledgeably about politics, sports, goings-on around the church of Baltimore, theology and always from the perspective of the Gospel. He was a ‘What would Jesus do, think, feel, say?’ sort of dude long before it was in!”