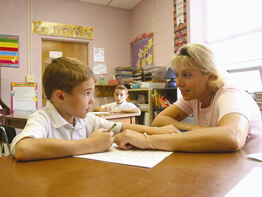 An archdiocesan program designed to meet the educational needs of Catholic school students with documented learning disabilities has expanded to a third location.
PRIDE (Pupils Receiving Inclusive Diversified Education), which has been offered at Mother Mary Lange School in Baltimore and Sacred Heart of Mary School in Graceland Park for several years, began operating at St. Jane Frances de Chantal School in Pasadena with the start of the current school year.
There are 11 PRIDE students enrolled at St. Jane Frances, bringing the total enrollment among the three schools to 72, according to Dr. Ronald J. Valenti, superintendent of Catholic schools.
“Expanding to a third location enhances our commitment to students who need that kind of attention,” said Dr. Valenti, adding that he hoped the archdiocese might one day offer a fourth PRIDE program in the western part of the archdiocese.
“PRIDE offers smaller class sizes so teachers can really zero in on what students need,” he said. “It helps them become more able to function in the regular classroom setting.”
Some of the kinds of clinically diagnosed learning disabilities addressed in the program include problems with reading or mathematics and difficulties with written or oral communication. All students accepted into the program must have undergone professional testing by the county or another source.
Ronald Burinsky, principal of St. Jane Frances, said most of the students in his program have difficulty with language arts. Each receives an individualized learning plan, he said.
“In today’s schools, you’re probably talking about 10-15 percent of the student population that has learning disabilities – a much larger number than meets the eye,” Mr. Burinsky said. “It’s important to give them remediation in the classroom, but also to do it in a compassionate, loving atmosphere with the kind of Catholic identity and values that are offered in our schools.”
Before joining the PRIDE network, St. Jane Frances had formed a student help team consisting of a counselor and two teachers. PRIDE will allow the school to build on its earlier attempts at reaching out to students with learning disabilities, Mr. Burinksy said.
PRIDE students use the same curriculum as other students, the principal said, but it is adapted to their skill level. Up to 30 students could be accommodated in the program at St. Jane Frances, where there is currently one full-time PRIDE teacher and an assistant instructor with training in special education.
In addition to regular tuition, students enrolled in PRIDE are charged a fee of more than $1,500 to help cover the cost of the specialized teaching, the principal said.