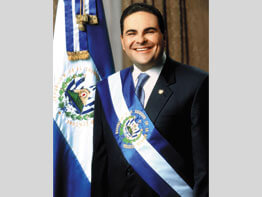 A former radio and television sports announcer who bought his own radio station, President Saca was honored at a dinner held by the foundation at U.N. headquarters in New York.

Archbishop Migliore said the Salvadoran president was the unanimous choice of the board of the Path to Peace Foundation, an agency established to support the work of the Holy See mission to the United Nations.

A member of the National Republican Alliance, known by its Spanish acronym ARENA, President Saca was elected president of El Salvador with nearly 58 percent of the vote March 21, 2004, and took office June 1 of that year.

“One of his first actions as president was to appoint a commissioner for democratic governing, who in turn created a group that includes representatives of all the political parties to discuss and find solutions to issues of national interest,” said a press release announcing the award.

“He also introduced reforms in the law pertaining to the judicial sector and others aimed at reducing delinquency; approved fiscal reform; and has traced out ‘the map of poverty’ that identifies the areas of extreme poverty in order to work toward eradicating it,” it said.

President Saca, 43, is descended from Palestinian immigrants and began his radio career at the age of 13. He was named president of the Salvadoran Radio Association in 1997 and was also a member of the International Radio Broadcasting Association, chairing its committee on freedom of speech.

The Path to Peace Award is presented annually to honor a person’s “commitment to the development of peace in the national and international arenas.”