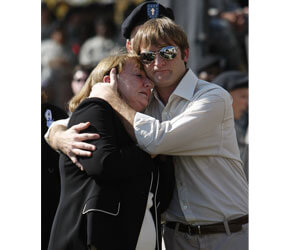 FORT HOOD, Texas – The memory of the 13 victims killed Nov. 5 inside Fort Hood “will be honored in the places they lived and by the people they touched,” President Barack Obama said at a Nov. 10 memorial at the fort, the Army’s largest U.S. base.

“We come together filled with sorrow for the 13 Americans that we have lost, with gratitude for the lives that they led, and with a determination to honor them through the work we carry on,” Obama said.

“For those families who have lost a loved one, no words can fill the void that has been left,” he added. “Their life’s work is our security, and the freedom that we too often take for granted.”

Obama said, “It may be hard to comprehend the twisted logic that led to this tragedy. But this much we do know: No faith justifies these murderous and craven acts; no just and loving God looks upon them with favor. And for what he has done, we know that the killer will be met with justice – in this world, and the next.”

Maj. Nidal M. Hasan, 39, has been arrested in the shooting spree. A psychiatrist serving on the base, he was wounded by a first responder and remained hospitalized. The soldier, a Muslim, was scheduled to leave soon on his first deployment to the Middle East – a deployment he had sought to avoid.

– Maj. Libardo Eduardo Caraveo, who leaves behind a wife, sons and stepdaughters.

– Staff Sgt. Justin DeCrow, who is survived by a wife and daughter.

– Retired Maj. John Gaffaney, a psychiatric nurse who was preparing to return to Iraq as a captain after three years of trying to return to active duty. He is survived by a wife and son.

– Spc. Frederick Greene, who leaves behind a wife and two daughters.

– Spc. Jason Hunt, a husband and father of three children.

– Sgt. Amy Krueger, one of three woman killed in the rampage.

– Pfc. Aaron Nemelka, who was trained to defuse bombs.

– Pfc. Michael Pearson, who was preparing for his first deployment.

– Capt. Russell Seager, a Veterans Affairs nurse who is survived by a wife and son.

– Pvt. Francheska Velez, who was pregnant with her first child.

– Pfc. Kham Xiong, whose relatives said he was in line waiting for a physical. His wife sent him a text message saying, “Come home for lunch and go back later.” Xiong wrote back, “No, I’ll stay. It’s almost my turn.”