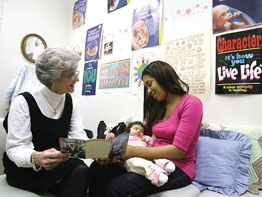 A few years ago, the Greater Baltimore Center for Pregnancy Concerns (GBCPC) experienced such a crushing budget crunch it was forced to close its offices in Highlandtown and Dundalk.

Only when the Catholic Church stepped forward to offer facilities for $1 annual rent at St. Brigid in Canton and St. Rita in Dundalk was the GBCPC able to renew operations in East Baltimore and Baltimore County – helping many women in crisis pregnancies choose life over abortion.

If Maryland legislators pass the Pregnant Women’s Support Act, pregnancy centers like GBCPC would be on more solid footing to help many more women, according to Carol Clews, executive director of the GBCPC.

“What pregnancy centers do is make the alternative to abortion a very viable one,” said Ms. Clews, noting that the GBCPC receives about 4,000 calls a year on its help line. The GBCPC, based on St. Paul Street in Baltimore, offers pregnancy tests, peer counseling, parenting classes, maternity and infant supplies and referrals to community resources.

“Planned Parenthood receives an enormous amount of money from the state,” Ms. Clews said. “I don’t see any reason pregnancy centers can’t have a place in the budget.”

Deacon Richard “Monti” Montalto, coordinator of “Pro-Life Initiative Baltimore,” said there is a tremendous need in the Baltimore area for increased support for women in crisis pregnancies. He noted that in a city that could use several crisis pregnancy centers, the GBCPC is the only one in operation.

Because there are so few resources available in the city, many of the thousands of calls for help are referred to centers in the counties, Deacon Montalto said. But women often lack transportation to get to the centers.

“There needs to be better access to the pregnancy centers,” Deacon Montalto said.

Deacon Montalto recently concluded a survey of the 42 pregnancy centers in operation throughout the state, receiving a more than 50 percent response rate. When asked how they would use additional funding, pregnancy centers identified advertising, testing for sexually transmitted diseases, establishing new maternity homes, daycare services, parenting classes, mentoring programs and sonograms as areas that could use support, according to Deacon Montalto.

“Some of these centers are receiving as many as 17,000 calls a year,” Deacon Montalto said. “But it’s still not meeting the demand. How many women are falling through the cracks?”

Maternity homes are especially needed to provide havens for women in crisis pregnancies who have nowhere else to turn, Deacon Montalto said. His group is trying to establish two maternity homes in Baltimore City. The Gabriel Network already sponsors four maternity homes throughout the state, while also providing financial counseling, parenting and other services.

Ms. Clews said she is excited about the Pregnant Women’s Support Act because if enacted, it might give her pregnancy center the resources it needs to pay employees who currently volunteer their services. That would provide increased services for women in need, she said.

“I feel cautiously optimistic that it will pass in the legislature,” said Ms. Clews. “It’s a very positive program that would make a real difference in the lives of many people.”