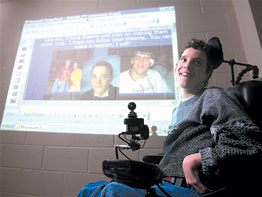 Nicholas Sabo will graduate from high school this spring, but he’s done plenty of teaching as well as learning.

The 21-year-old, who attends South River High School in Edgewater and is a parishioner of Holy Family, Davidsonville, has cerebral palsy.

His wrists are bent at cruel angles, his words slur sometimes and he’s strapped into a motorized wheelchair. But his enthusiasm shines through, as does his sense of humor. He offers a ready smile as he prepares to give a PowerPoint presentation he’s created to foster understanding and acceptance of people with disabilities.

The presentation will be the focus of an assembly at South River High School March 19.

Using an adaptive headset that allows him to tap commands to a laptop, Nicholas wrote the text, selected the pictures and designed the way material appears on the screen.

“I had help with the music,” he said.

Nicholas – the oldest of four children, including a younger sister who requires a wheelchair and feeding tube as a result of Rett syndrome – was born three months premature, weighing just 2 pounds, 6 ounces.

“They said I would be severely disabled,” he wrote, “but how could they know my potential?”

Although he needs assistance in most activities – an aide has accompanied him through school – Nicholas displays a zeal for learning.

Like many soon-to-be graduates, he’s looking forward to going away to college. He’s been accepted at Edinboro University of Pennsylvania, which offers programs and support for disabled students.

Nicholas, an ardent football fan who this year was a bit disappointed in the outcome of his fantasy team, once wanted to be the first football referee to use a wheelchair. But he’s decided a more practical ambition is a career in criminal justice.

“He’s excited; it’s something he wants,” said his mother, Mary Ann Sabo, adding that more than 100 students who use wheelchairs are enrolled at Edinboro. Aides are available in the dormitories and the cafeteria, and assistance with note taking is offered, but Nicholas will attend classes by himself.

“We’re a little nervous about that,” said his dad, Steven Sabo. But Nicholas is eager to explore college life.

“We all love him and wish him the best,” said William Myers, principal of South River High School. “He certainly has a bright future.”

He’s watched Nick blossom from an introvert into an extrovert.

“The other students see first-hand that even though he’s severely limited, Nick can be a contributing member of the student body,” Mr. Myers said, adding that Nick has taught everyone “what we should have known all along – a student with a disability can be educated in an inclusive setting.”

One camp counselor at the Joni and Friends Family Camp was so moved after meeting Nick there that he changed career plans from chemistry to neurology. In a letter to Nicholas’ family, the counselor, Chadd Funk, wrote: “You see, it is so easy to look at Nick and forget that inside that body is a real person. Nick’s body houses an extraordinary person with a fire for life unlike anyone that I’ve ever met. He continually challenged me with his upbeat attitude but even more so with his deep faith in the Lord.”

In his presentation, Nicholas said, “I would like to make a difference in this life.”

His classmates at South River know he already has.