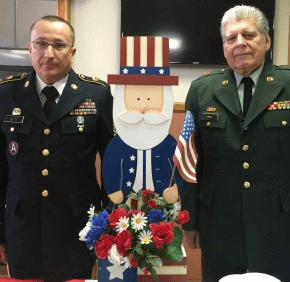 By Lisa Harlow
Special to the Review
After horrendous acts of torture, beatings and months on end of solitary confinement, one couldn’t blame retired U.S. Air Force Colonel John Fer if he had lost his faith during his nearly seven years as a prisoner of war (POW) at the “Hanoi Hilton” in Vietnam.
Instead, Fer clung tightly to his faith in God to get him through it all.
Fer told his story to parishioners of St. Clare in Essex at a special Nov. 8 Mass and breakfast honoring veterans and their service to the country.
“In light of our continued involvement in the Middle East and with a lot of our vets coming home, I thought this was a great way to honor our vets and point out that their presence among us is so silent but also so powerful,” said Father Jesse L. Bolger, pastor.
Parishioner and U.S. Army First Sergeant Paul Blitz, who served in Iraq and Kuwait, approached Father Bolger about doing something special for veterans, and he helped to organize the event. Among the dozens of veterans in attendance were Bill Morningstar, a founding parishioner of St. Clare who received a Purple Heart for injuries he sustained during the Korean War, and Father Bolger’s father Brian Bolger, a U.S. Navy veteran.
Father Bolger came to know Fer and his wife because they are members of his parents’ parish, St. Peter the Apostle in Libertytown, and he invited him to speak.
Fer explained how his plane was shot down Feb. 4, 1967. The three other crewmembers on board were killed.
“When I first was captured, I told myself, ‘You’ve got to have your faith in God sustain you for whatever length of time you will be here,’” Fer said.
During his time as a POW, Fer never had a Bible. He made a homemade rosary from a piece of twine with 10 knots , using it in prayer three times a day.
Once while being beaten, Fer prayed the Hail Mary and a guard suddenly stopped the beating and sent him back to his cell.
“This reaffirmed my faith in God,” Fer said. “We cannot go through life without God by our side. The power of prayer can overcome any trials we may be going through. Every POW I came across in North Vietnam had a strong faith in God.”
Later on in his stay and out of solitary, Fer acted as a chaplain, along with John McCain and two others, and every fourth Sunday he put together a liturgy. He remembers his favorite was Easter 1971.
“I’m so thankful I could be here today to share the impact of what my faith meant to me and what it means to our armed forces today,” said Fer, who emphasized the importance of chaplains in the military.
Fer received a standing ovation, and after Mass, the St. Clare Hospitality Committee welcomed everyone for breakfast in the parish hall.