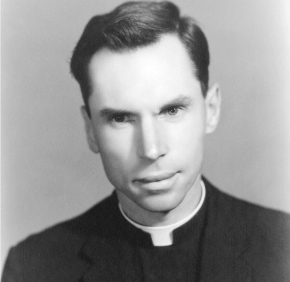 By George P. Matysek Jr.
gmatysek@CatholicReview.org
Twitter: @ReviewMatysek
As a boy growing up during the Great Depression in a modest Northeast Washington neighborhood, Monsignor Aloysius Schwartz often accompanied his mother when she delivered homemade meals to poor families a block away.
The lesson in charity had a profound impact, according to Monsignor Schwartz’s younger sister, Dolores Schwartz Vita. It would be one of the reasons the future cleric set his sights on the priesthood, assisting hundreds of thousands of people around the world as a missionary and founder of religious communities.
“Our mother was very spiritual and our Catholic upbringing and Catholic education played an important role,” explained Vita, a parishioner of St. Mary in Annapolis. “He wanted to dedicate his life to helping the poor.”
Pope Francis signed a Jan. 22 decree declaring that Monsignor Schwartz lived a life of “heroic virtue.” A key step on the path to canonization, the action means Monsignor Schwartz will now be known as “venerable.”
Monsignor Schwartz’s father, Louis Schwartz, was baptized at St. Jerome in Baltimore, and married Cedelia A. Bourassa of Montana. They raised their family in Washington.
Related article: Washington priest on road to sainthood devoted to aiding the poor
One of eight children, including a sibling who died at birth, Monsignor Schwartz entered St. Charles Minor Seminary in Catonsville right out of Holy Name Elementary School in Washington.
Vita remembered that her brother often played Mass at home, using Necco Wafers as “Communion” and preaching homilies to his brothers and sisters. The rosary was prayed as a family, she said, and “rice bowls” for the poor always made an appearance at Lent.
“Our uncle sent us comic books from Montana for Easter,” Vita said. “One of them was about a hero who went around the world helping people. I know that made an impression on him.”
After studying at St. Charles from 1944 to 1948, Monsignor Schwartz continued his religious formation with the Maryknoll missionaries and earned a theology degree from Louvain University in Belgium. He was ordained in Washington in 1957, and served as a diocesan priest in the Diocese of Busan, Korea.
Monsignor Schwartz, a marathon runner and sportsman, toured the United States and Europe to raise money for missionary work. He founded the Sisters of Mary in Busan in 1964, working with the women religious to establish programs for education, housing and job training for orphans. He also helped establish hospitals in South Korea and the Philippines. The work of the sisters later extended to Mexico.
In 1981 Monsignor Schwartz founded the Society of the Brothers of Christ, whose work focused on the homeless of Seoul.
“The most amazing thing is that he found ways to support his work around the world,” said Vita, who will attend a March 14 Mass of Thanksgiving in the Philippines in honor of her brother. “He was not under any big organization.”
Monsignor Schwartz’s cause for canonization is being promoted by the Archdiocese of Manila.
Deacon Leroy Moore, stationed at St. Mary in Annapolis, met Monsignor Schwartz in 1983 when the future deacon traveled to Korea to adopt two children.
He recalled that although Monsignor Schwartz ran vast charitable programs that touched countless lives, he did it humbly from a 12-by-14-foot bedroom office.
“He was a marvel,” Deacon Moore said. “I called my wife the day I met him and said, ‘I just met a living saint.’ You felt the Spirit of God in his presence.”
Monsignor Schwartz, twice nominated for the Nobel Peace Prize, died of amyotrophic later sclerosis (Lou Gehrig’s disease) in 1992. He is buried in the Philippines.
Also see:
‘Who, me? Yes, you.” Fess up to sins, stop judging others, pope says
Father Hesburgh’s long shadow extended to Baltimore
PrevNext