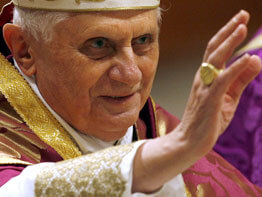 Christ’s sacrifice, the pope said, overturned the pagan worldview of the early Christian era. In Christianity’s new vision, the universe was governed not by the laws of matter but by a personal God who revealed himself in the person of Jesus Christ.

“And if we know this person and he knows us, then truly the inexorable power of material elements no longer has the last word; we are not slaves of the universe and of its laws, we are free,” he said.

Throughout its 76 pages, the pope’s encyclical on hope is not just an exposition of philosophical and theological arguments, but an invitation for people to personally encounter Jesus Christ.

That invitation has been the core of Pope Benedict’s mission over the last two and a half years.

In his first encyclical, “Deus Caritas Est” (“God Is Love”), the pope said Christianity’s main purpose was to help people accept God’s love and share it – beginning with love “in its most radical form,” the sacrifice of Christ.

In “Spe Salvi,” the pope argued that faith in Christ brings well-founded hope in eternal salvation, the “great hope” that can sustain people through the trials of this world.

In presenting Jesus Christ as the source of love and hope for contemporary men and women, the pope has tried to explain the church’s beliefs in ways that are convincing without being authoritarian.

Certainly he has been a critic of contemporary culture in these pages, warning against the exaltation of science and technology, economic and individual selfishness, ideological excesses and misconceptions about freedom.

But his critique is based on reasoned analysis, reflecting the pope’s conviction that Christianity, more than just an exercise in faith, does and must make sense to the modern mind.

The pope also has shown sympathy for people who may doubt, or who are no longer attracted by the church’s traditional arguments.

In “Spe Salvi,” for example, the pope acknowledged that many people today may find the idea of eternal salvation monotonous and “more like a curse than a gift.” He went on to say that “eternal life” is an inadequate term and suggested that people think of salvation more in terms of a supreme moment of satisfaction or joy.

Some readers of “Spe Salvi” were struck by the fact that the pope did not mention the Second Vatican Council or cite its documents. Pope Benedict in general appears to prefer the writings of individual Christians – ancient and contemporary – to illustrate his points.

In this encyclical, the pope quoted early church fathers and contemporary saints, making powerful arguments for hope that drew from centuries of Christian experience. Both the sermons of St. Augustine and the diary of a 19th-century Vietnamese martyr were at home in this text.

Some of the more interesting and striking passages of the new encyclical have been honed in papal talks and writings over the last two years.

For example, the pope’s assessment of Marxism, although ultimately negative, contained praise of Karl Marx’s “great analytical skill” in describing the social injustices of his time. Pope Benedict made a similar statement in his book, “Jesus of Nazareth,” published earlier this year.

Some of the encyclical’s most compelling language came in a reflection on the Last Judgment, which included these words about divine justice, “Evildoers, in the end, do not sit at table at the eternal banquet beside their victims without distinction, as though nothing had happened.”

That’s a theme the pope explored during a trip to Germany in 2006, when he said the idea of judgment should call people to accountability.

“Don’t we want the outrageous injustice and suffering which we see in human history to be finally undone, so that in the end everyone will find happiness, and everything will be shown to have meaning?” he asked then.

On that occasion, as in the new encyclical, the pope said only one thing can keep people from being afraid of the God of judgment: an encounter with Jesus Christ, God’s “human face.”