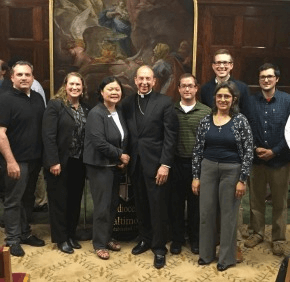 “What is a world where food becomes waste and waste becomes food?” asked Carolyn Woo, president and CEO of Baltimore-based Catholic Relief Services, an international humanitarian agency of the U.S. Catholic community.

It was one of many thought-provoking statements during an Oct. 7 panel discussion on Pope Francis’ encyclical “Laudato Sí: On Care for Our Common Home,” in which he reflects on humanity’s responsibility for God’s creation, which includes both the earth and those who populate it.

Hosted by Baltimore Archbishop William E. Lori at St. Mary’s Seminary and University in Roland Park, the discussion brought out more than 100 concerned citizens, clergy and religious, while 150 watched remotely via a Periscope livestream made available on the Archdiocese of Baltimore’s Twitter page.

Woo, who participated in the Vatican’s official release of the encyclical in June, referred to the pope’s work as “a love story” as opposed to “a scientific paper on the environment.”

“Laudato Sí,” she said, is all about our relationships: to God, to neighbors and to nature.

When one party fails to hold up its end of a relationship, the other party is disappointed.

“I saw the best in you, and you forgot who you were created to be,” Woo said, imagining what God might say in light of environmental degradation and widespread poverty.

She echoed a much-cited theme of “Laudato Sí,” the indissoluble bond between humanity and the environment.

“Damage to the environment is damage to people,” Woo said, also referencing Pope Francis’ indictment of destructive consumerism, which he calls the “throwaway culture” – the wasteful mentality that casually tosses out food and goods but also the lives of the poor, the sick, the elderly and the unborn:

Joining Woo in the discussion was David Cloutier, Knott professor of theology at Mount St. Mary’s University in Emmitsburg.

Cloutier discussed the pope’s encyclical with regard to four themes: beauty, possessions, the “technocratic paradigm” and sin.

He outlined one reason for our failure to care for creation, which he said we should view as “the gift of a loving God.”

While “all creatures have a vocation toward God,” that vocation is often ignored, he said.

“We do not always see the beauty of God’s creation,” he said. “Why?”

He noted our distracting propensity toward acquiring possessions and property, which cost us money but also “have a social mortgage” which costs creation and by extension those whose livelihoods are directly connected to it.

Exacerbating our materialism is our tendency to use technology in such a way that separates us from God’s creation.

“Technological choices are really decisions about the kinds of society we want to build,” he said.

Cloutier echoed the pope’s concern about the power technology has over us, and his advice that we “slow down and look at reality in a different way.”

Lonnie Ellis, the final speaker, is associate director of Catholic Climate Covenant, an organization that originated in the U.S. Conference of Catholic Bishops and is devoted solely to solving climate change, according to its website, catholicclimatecovenant.org.

Ellis, a member of the Secular Franciscan Order, emphasized the direct effects of climate change on the poor of the world.

While he was assured that a malaria vaccination was an unnecessary precaution for a recent trip to Nepal, he did see a mosquito while there, he said. He chalked up the unexpected sight to rising temperatures, and noted their potential to bring new diseases “into places that have never experienced such sickness.”

“Existing disasters,” he added, especially in those places that already lack the infrastructure to mitigate them, are going to get “worse and worse” because of climate change.

Lest the audience succumb to a gloom-and-doom outlook, the speakers emphasized that God did not give us the responsibility to care for creation without the tools to do so.

“There is a problem,” Woo acknowledged. “It is our problem. And there is definitely something we can do about it.”

Seminarian Matthew Himes, 26, a second theology student at St. Mary’s, called the discussion “really powerful.”
“It touched on all the central themes in Catholicism and what Pope Francis is trying to convey, especially creation’s being ordered and a gift from God,” he said.

Maureen Cromer and Erik Zygmont contributed to this article.