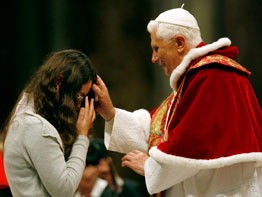 Amid the hundreds of papal meetings and events, those three themes stood out in special focus as 2008 drew to a close.

In June, the pope opened a jubilee year to celebrate the 2,000th anniversary of the birth of St. Paul. Accompanied by Ecumenical Patriarch Bartholomew of Constantinople and other representatives of Orthodox and Anglican churches, he said the apostle was a model of missionary courage for people struggling against religious indifference in modern society.

In October, the pope presided over a three-week Synod of Bishops on the Word of God that explored ways to bring Catholics closer to the Bible and promote better use of Scripture in liturgy, catechesis and evangelization.

In April, Pope Benedict made his first papal visit to the United States, spending six days in Washington and New York and addressing the U.N. General Assembly. Among the highlights were a private meeting with victims of clergy sex abuse, Masses at baseball stadiums in both cities and a solemn visit to ground zero to pray for victims of the Sept. 11 attacks.

During his U.S. visit, the pope took aim at what he called the “attack of a new secularism” that threatens to undermine traditional moral values and the voice of religion in public affairs. American society is at a moral crossroads, he told his listeners, as it faces problems such as social alienation and anger, increased violence and “forgetfulness of God.”

The pope’s clear and repeated condemnation of sex abuse in the United States was echoed during his July trip to Australia, where he joined more than 200,000 young Catholics from 170 countries for World Youth Day celebrations. Before leaving the country, he celebrated a private Mass with Australian victims of clergy sex abuse.

His visit to Australia was the longest foreign trip in duration and distance. Addressing cheering throngs of young people, he urged them to give themselves to Jesus and resist the spread of a “spiritual desert” in the modern world.

Pope Benedict’s third foreign trip of 2008 was to France, where he said Mass for an overflow crowd in Paris and visited the Marian shrine of Lourdes, where he commemorated the 150th anniversary of Mary’s apparitions at the site.

In June, President George W. Bush paid a visit to the Vatican, in a sense returning the pope’s visit to the White House two months earlier. Although the pope and the Vatican steered clear of involvement in the U.S. presidential election campaign, as soon as it was over the pope sent a message to President-elect Barack Obama, congratulating him and offering prayers for him and the entire country.

China was clearly on the pope’s mind in 2008. He established May 24 as the world day of prayer for the church in China, saying Catholics there should never live in fear of spreading the Gospel.

The church in Iraq suffered increasing anti-Christian violence and intimidation, and the pope deplored the death of Chaldean Catholic Archbishop Paulos Faraj Rahho of Mosul, who was found dead in March, two weeks after being kidnapped. In July, the pope discussed the worsening situation with Iraqi Prime Minister Nouri al-Maliki.

In India, a deadly wave of anti-Christian violence in Orissa state prompted a papal appeal for greater government protection.

In interreligious affairs, the pope helped arrange a new chapter in Catholic-Muslim dialogue when the Catholic-Muslim Forum met at the Vatican in November. Addressing participants, he said members of both faiths have a common obligation to defend human rights and help the world’s suffering.

In a meeting in October with the International Jewish Committee on Interreligious Consultations, the pope said Catholic-Jewish dialogue was a “sacred duty.” The meeting was shadowed in part by continuing controversy over the sainthood cause of Pope Pius XII. At a Mass Oct. 9 to commemorate the 50th anniversary of Pope Pius’ death, the pope defended the late pope’s efforts to help Jews during World War II; at the same time, he has put Pope Pius’ cause on hold while the church reflects more deeply on the issue, Vatican officials announced.

The pope issued no encyclicals or other major teaching documents in 2008, yet in talks to parishes, politicians and church organizations he focused increasingly on two themes: economic justice and the environment.

He urged international leaders to tackle global poverty with courage and to honor the commitments made in 2000 toward structural relief to poorer countries. To the church’s own faithful, he hammered home what has become a favorite theme: that the practice of real-world charity is a litmus test of Christian faith.

As the global economic crisis worsened during the year’s second half, the pope reminded financial institutions of their duty to put people before profits and described modern ideals of money and material success as passing realities, saying: “Whoever builds his life on these things – on material things, on success, on appearances – is building on sand.”

In Australia, in the northern Italian mountains and at the Vatican, the pope also spoke frequently about the need to safeguard creation. To World Youth Day participants, he emphasized that the morality of environmental protection flows from God’s plan for creation as a whole.

In October, at the increasingly “green” Vatican City, he saw the installation of a new solar-panel roof at the Vatican’s audience hall.