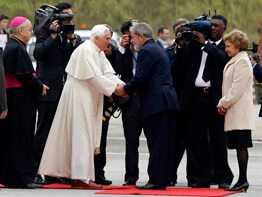 SAO PAULO, Brazil – Arriving in Brazil on his first papal trip to Latin America, Pope Benedict XVI said he wanted to help reinforce Christian values and counter new threats to the poor, the abandoned and the unborn.

“I am well aware that the soul of this people, as of all Latin America, safeguards values that are radically Christian, which will never be eradicated,” the pope said May 9.

The pope addressed several hundred civil and church dignitaries at an airport welcoming ceremony outside Sao Paulo, where his plane touched down after a 12-hour flight from Rome.

The pope said he had come with an essentially religious message that reflected the goals of the Fifth General Conference of the Bishops of Latin America and the Caribbean, which he was to open May 13.

The pope said he expected the conference to strengthen the subcontinent’s Christian identity “through the promotion of respect for life from the moment of conception until natural death as an integral requirement of human nature.”

“It will also make the promotion of the human person the axis of solidarity, especially for the poor and abandoned,” he said.

The pope emphasized that the majority Catholic populations of Latin America must make a particular contribution for the common good if the region is to solve its problems and build a future of peace and hope.

That means strengthening the family as “the basic cell of society” and promoting the values present in every level of society, especially among the indigenous peoples, he said.

The pope’s reference to the unborn was significant in Brazil, where there has been increasingly political pressure to make abortion legal. Officials say clandestine abortions are practiced widely in the country.

On the plane carrying the pope, his entourage and about 70 journalists, the pope spoke warmly about Brazil and said he was happy to return to Latin America, where he had visited several times as a cardinal.

Answering reporters’ questions, he said that while he was aware of the immense social and economic problems in the region, he also was acquainted with the rich qualities of the people.

Spending two and a half days in Sao Paulo, the pope was to meet with the Brazilian president in Bandeirantes Palace as well as with representatives of other Christian churches and other religions in St. Benedict Monastery.

He was to meet with young people in Paulo Machado de Carvalho stadium before canonizing a Brazilian Franciscan, Blessed Antonio Galvao, during his May 9-13 visit.

Then he moves to the Basilica of the National Shrine of Our Lady Aparecida, where he will inaugurate the bishops’ conference, celebrating Mass and delivering a major speech to participants of the May 13-31 meeting.

The trip turns a spotlight on Latin America, a geographical area that has had little attention from this pope to date, but where 43 percent of the world’s Catholics live.
It also broadens the horizons of the pope’s two-year pontificate, taking him outside Europe, where four of his previous five trips have occurred.

Although the president, a former lathe operator and leader of the Workers’ Party, was re-elected by a wide margin last October, Cardinal Geraldo Agnelo of Salvador recently told the British Broadcasting Corp. that he was “not completely satisfied” with the administration.

“It talks about what it wants to do, but a full term has gone by,” he said. “The government always favored capital instead of labor.”

In a May 7 interview with Catholic radio stations, da Silva said the bishops had been unfair in their criticism and noted that Brazil’s economy is strong. An anti-poverty program that provides cash subsidies for more than 11 million Brazilians has been credited with reducing poverty slightly in the impoverished northeastern part of the country.

But Brazil’s bishops said the government has failed to address key issues, particularly land reform. Bishop Mauro Montagnoli of Ilheus said there was a “lack of political will” to implement land reform and that the bishops would continue to press for change.

“It isn’t enough to give people land if conditions for agricultural development do not exist,” he said.

Abortion is another issue that is likely to come up in the pope’s conversation with the president. Da Silva told the Catholic radio stations that, although he opposes abortion, his “position as father, husband and citizen” and his “behavior as president” are “two completely different things.”

Calling abortion a public health issue, he said, “If Brazil had a good process of family planning and sex education, perhaps we would not have the number of unwanted pregnancies that we have today in Brazil.”

In the interview, the president also faced questions about corruption scandals in his party that have caused even staunch supporters to become critical and disenchanted. Going on the offensive, he blamed the media for being quick to report corruption accusations but slow to publicize cases in which a politician is cleared.

“The investigation has barely begun before the person is already convicted publicly, and afterward no one apologizes,” the president said. He added that corruption cases should only be made public once investigations have shown those involved to be guilty.