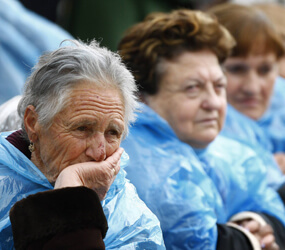 ONNA, Italy – In a visit aimed at strengthening people’s faith and hope for the future, Pope Benedict XVI called for concrete and immediate measures to rebuild towns and villages devastated by a deadly earthquake.

With the sun struggling to break through thick rain clouds, the pope told survivors it had been his desire to come see them from the very moment the earthquake struck this mountainous central Italian region April 6.

“I would have liked to have gone to every town and every neighborhood, to all the tent cities and to have met everyone if it had been possible,” he said under drizzling rain in the makeshift tent encampment a few miles outside L’Aquila.

The pope’s April 28 visit took him first to Onna – a tiny village that had once been home to some 300 people. The magnitude 6.3 earthquake reduced buildings in the town to rubble, killing some 40 people and rendering the entire population homeless.

Poor weather conditions forced the pope to travel to the affected areas by car instead of by helicopter.

The severity and extent of the damage was evident even when viewed from the highway encircling L’Aquila. The city and its outskirts have become ghost towns, with streets and parking lots empty of cars and entire apartment buildings dark and shuttered. Several buildings had enormous holes blown out of their walls, looking as if they had been bombarded with rocket fire.

The quake and its string of aftershocks left some 65,000 people homeless, nearly 300 people dead and another 1,500 injured, according to authorities.

Half of Onna’s residents relocated to hotels along the seaside or moved in with relatives. The other half stayed behind, living in bright blue government-issued tents. Many of them are elderly, preferring to tend to what little they have left: their chickens, farm animals and vegetable gardens.

At the tent encampment in Onna, the pope expressed his sympathy for those living away from their homes and those living out of their cars or tents, especially with such cold and rainy weather.

“Dear friends, my presence among you is meant to be a tangible sign that the crucified and risen Lord has not abandoned you,” he said.

He said God is present and not deaf to their cries for help and their worries after having lost their homes, savings, jobs and loved ones.

The pope said those who lost their lives are with God and that they would want to see their surviving friends and relatives go forward with courage and hope.

The outpouring of help and support cannot end with just emergency aid, he said.

Efforts must continue and “become a steady and concrete project” so that the city and surrounding towns can rise again, he said.

The pope expressed his concern for the many young people who have been “suddenly forced to tackle a harsh reality,” children who can no longer go to school and elderly deprived of their homes.

When the pope finished his remarks, he warmly greeted residents and aid workers. Mothers brought their babies and toddlers to the pope to be blessed.

The pope then rode through the devastated village across a freshly graveled road in a white civil defense minibus.

One resident of Onna told journalists that 99 percent of the buildings are uninhabitable and need to be torn down.

“We can’t bear to see it the way it is; it’s heartbreaking,” he said.

The pope then went on to L’Aquila to visit the severely damaged Basilica of Santa Maria di Collemaggio.

Surrounded by firefighters wearing helmets, the pope went through the basilica’s holy door to venerate the remains of St. Celestine V, a 13th-century pope who abdicated just a few months after his election.

As a gift, Pope Benedict placed the long woolen pallium he wore during his installation Mass on top of the glass casket.

Heaps of debris were still sitting on the floor inside the basilica, and the pope asked the parish priest, “It all collapsed?” The priest replied that it did.

Firefighters warned the papal entourage that it was too dangerous to linger inside.

The pope was visibly taken aback by the level of destruction.

Father Nunzio Spinelli, the basilica’s rector, said the pope told him, “Now that I have seen the damage with my own eyes I can see that it is even worse than I imagined.”

The pope then visited the site of a university dormitory that collapsed and claimed eight students’ lives.

He met with about a dozen students, blessing them and talking with them. He urged them to continue with their studies because “it’s for your future.”

The pope told those who were majoring in engineering to help the town build good homes.