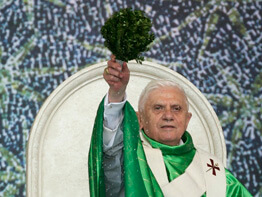 LORETO, Italy – Pope Benedict XVI urged a megagathering of Italian young people to embrace Christ and “go against the current” of a culture marked by violence, arrogance and selfishness.
The pope also struck a strong ecological theme, saying young people need to press for courageous changes to save the planet “before it’s too late.”
An estimated 500,000 youths applauded the pope’s words at a prayer vigil Sept. 1 and at a Mass the following day, on a hillside next to the Marian shrine of Loreto. The weekend assembly also featured music and skits, but the highlight was clearly the pope’s presence.
“The (Christian) message is this: Do not follow the way of pride but the way of humility,” the pope said at the Mass.
“Go against the current: Don’t listen to the persuasive and self-seeking voices that today promote lifestyles marked by arrogance and violence, by self-importance and success at any cost, by appearances and possession to the detriment of being,” he said.
He asked young people not to be passive recipients of the countless messages that arrive through the mass media.
“Be vigilant! Be critical! Don’t be dragged along by the wave produced by this powerful movement of persuasion,” he said.
Instead, the pope held out an “alternative path” marked by sharing, purity, commitment to study and work, and a deep interest in the common good.
This does not mean the Christian must renounce all pleasure or success in life, he said. On the contrary, faith gives deeper satisfaction, he said.
“Our faith does not propose a package of moral prohibitions, but a joyful path,” he said.
The pope told the young people that the key to finding the right path was in a personal encounter with Christ. He said it was also essential that they participate in the life of the church.
“One cannot call oneself a disciple of Jesus if one doesn’t love and follow his church. The church is our family,” he said.
At the prayer vigil the day before, the pope hugged young representatives after listening to them tell of their personal spiritual trials.
In a talk, he raised the theme of environmental protection in the Christian context. Following Christ means being aware that the created world belongs to all and must be protected, he said.
“To the new generations is entrusted the future of the planet, where it is clear that development has not always been able to protect the delicate balance of nature,” the pope said.
He said the ecological situation today calls for courageous choices.
“There should be a decisive ‘yes’ to the protection of the created world and a strong commitment to reverse those tendencies that could lead to situations of irreparable degradation,” he said.
He said water in particular was a resource in danger of becoming a motive of conflict around the world unless it is shared in an equal way.
The papal event took place on the day the Italian church has dedicated to ecological awareness. Organizers of the Loreto gathering sought to minimize its environmental impact by using biodegradable and recyclable materials.
The Loreto shrine holds what is revered as the house where Mary was born, raised and visited by the angel Gabriel. Tradition holds that the house was transported to Loreto from Nazareth by angels in 1294.
The pope said Mary’s purity still points the way to young people today.
“Looking at her and following her, you will discover the beauty of love, which is not, however, a disposable love that is fleeting and deceptive, the prisoner of a selfish and materialistic mentality, but true and profound love,” he said.
He lamented the number of divorces today.
“How many failures of love there are around us! How many couples hang their heads, give in and separate! How many families go to pieces!” he said.
He told the youths that he was praying that “the crisis facing the family today does not become an irreversible failure.”
During the weekend, the pope also briefly referred to a new book that collects dramatic letters of Blessed Mother Teresa of Calcutta, India, in which she reveals her inner spiritual suffering over a period of decades.
“All believers know about the silence of God,” he said. “Even Mother Teresa, with all her charity and her strength of faith, suffered from the silence of God.”
The pope said one reason even Christians sometimes have to endure this “silence of God” is to better understand those who do not know God and who seek a visible sign of his presence.
But by keeping an open and attentive heart, he said, “we can find great moments in which truly the presence of God becomes perceptible for us.”
The pope noted that Mother Teresa’s letters, which have prompted a wave of new media interest, were already known to church officials.