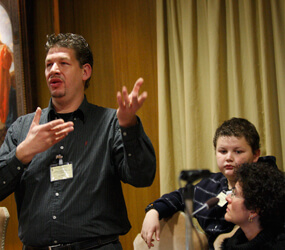 VATICAN CITY – Pope Benedict XVI lamented the serious lack of public programs and measures to address the needs of deaf people and a lack of even basic health care, which often can prevent hearing impairment.

He spoke Nov. 20 to some 400 people attending a Vatican conference addressing the role of the deaf in the church. A handful of interpreters signed the pope’s words to deaf participants during the audience in the Clementine Hall of the papal palace.

The Nov. 19-21conference was organized by the Pontifical Council for Health Care Ministry and was dedicated to “The Deaf Person in the Life of the Church.”

The pope said it is impossible to forget “the grave situation in which (the deaf) still live today in developing countries, both for the lack of adequate policies and legislation and for the difficulty in gaining access to basic health care.” Deafness “is often the consequence of easily preventable diseases,” he added.

“Therefore, I appeal to political and civil authorities, as well as international bodies, to offer the necessary support to promote, even in these (developing) countries, the needed respect for the dignity and rights of nonhearing people and to promote with adequate assistance their full integration into society,” the pope said in his address.

The pope lamented the ongoing prejudice and discrimination against the deaf, calling it “deplorable and unjustifiable.”

He praised those groups and individuals that promote the rights of the deaf, especially Catholic initiatives that offer education and assistance aimed at developing the full potential of deaf people.

The pope also spoke of another kind of deafness affecting the world – people who are unable to hear the voice of God and the cries of those who suffer.

Humanity must be healed and saved from a “deafness of the spirit, which raises barriers ever higher against the voice of God and the other, especially the cries of the weak and the suffering for help, and locks people into a deep and ruinous self-centeredness,” he said.

Jesus wishes to save people from “the solitude and incommunicability created by selfishness and to give rise to a new humanity,” which listens, communicates and enters into communion with God, he said.

Archbishop Zygmunt Zimowski, president of the health care ministry council, said that of the more than 278 million people with a hearing impairment and 60 million deaf people in the world, 80 percent of them live in low- and medium-income countries.

That is a sign that more must be done to improve health care in developing nations so more people have access to care that will prevent and cure such disabilities, he said in an interview with the Vatican newspaper, L’Osservatore Romano, Nov. 20.

There are 1.3 million deaf Catholics in the world, he said, and the church has much to do to improve the kind of pastoral care it offers them.

He said deafness is “an invisible handicap” that is difficult for parishes to accommodate.

Most handicaps require building modifications to ease accessibility, he said, but making the Mass and pastoral activities accessible to deaf people necessitates having someone on hand who can translate the spoken word into sign language.

Without sign language, a deaf person risks being isolated behind “an invisible and impenetrable wall of silence,” he said.

The November conference brought together people from 65 countries who were involved in the pastoral, social, psychological and medical care of those who are hearing impaired to discuss ways the church could provide the proper support for the deaf.

The Vatican invited numerous deaf and hearing religious who are fluent in sign language. Individuals and families who have a deaf member talked about their experiences and ideas.

Archbishop Zimowski said in order to allow the full participation of everyone, the Vatican used the simultaneous translation of speakers’ addresses into four different sign languages: American, British, Spanish and Italian. Four large video screens high on the front wall of the Vatican’s synod hall projected the images of four different interpreters who were signing behind the main dais.