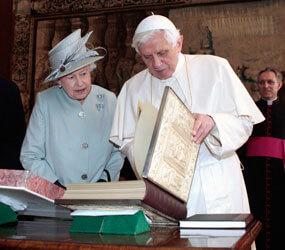 EDINBURGH, Scotland – Arriving in Scotland on the first leg of a four-day visit to Great Britain, Pope Benedict XVI appealed for preservation of the country’s long Christian tradition and warned against “aggressive” forms of secularism and atheism.

“Your forefathers’ respect for truth and justice, for mercy and charity come to you from a faith that remains a mighty force for good in your kingdom, to the great benefit of Christians and non-Christians alike,” the pope said Sept. 16 at a reception with Queen Elizabeth II and more than 400 distinguished guests at Holyroodhouse in Edinburgh, the Scottish capital.

The pope evoked the moral heroism of a long line of British figures, from Florence Nightingale to Cardinal John Henry Newman, whom the pope was to beatify during the visit. Christian witness was also evident during World War II against a “Nazi tyranny that wished to eradicate God from society,” he said.

“As we reflect on the sobering lessons of the atheist extremism of the 20th century, let us never forget how the exclusion of God, religion and virtue from public life leads ultimately to a truncated vision of man and of society,” he said.

In an unusual courtesy gesture, the queen sent her husband, Prince Philip, to greet the pope when he arrived at the Edinburgh airport after a two-hour flight from Rome. The pope looked eager to begin his busy program in Britain, and on the plane he told reporters he felt confident the country would give him a respectful reception – despite differences with some critics of religion.

Edinburgh welcomed the 83-year-old pope with a display of enthusiasm and Scottish tradition, including a parade, bagpipe bands and plaid tartans designed especially for the visit. It was his first visit as pope to Britain and the first time the country has hosted a pope since 1982, when Pope John Paul II toured England, Scotland and Wales for six days.

Pope Benedict was being hosted in an official state visit, and British authorities pulled out all the stops at Holyroodhouse, a former Augustinian monastery that now serves as the queen’s official residence in Scotland.

The pope removed his white zucchetto from his head and held it close to his chest as a military band played “God Save the Queen” after having played the Vatican anthem. The Guard of Honor gave the pope a royal salute in the courtyard of the palace, then the pope and the queen held a private meeting and exchanged gifts.

The two moved out onto the palace grounds to a giant marquee, a tent-like structure where hundreds of government and cultural invitees listened to their speeches.

The pope outlined an argument for the place of religion in public affairs, emphasizing that British saints and other leading Christians have “shaped the nation for good at the deepest level.” While Great Britain today strives to be a multicultural society, he said, it must respect the traditional values and cultural expressions “that more aggressive forms of secularism no longer value or even tolerate.”

He said the British media have a big responsibility in shaping the ideas and culture of its society and in promoting the “honesty, respect and fair-mindedness” for which the country is known.

Queen Elizabeth also underlined the importance of Britain’s Christian heritage and told the pope that his visit also is a reminder of “the Christian contribution to the encouragement of world peace and to the economic and social development of the less prosperous countries of the world.”

The queen said that because religion is so important to national identity, the relationship between different churches and different faiths is “a fundamental factor in the necessary cooperation within and between nation states. It is, therefore, vital to encourage a greater mutual and respectful understanding.”

The queen, who serves as governor general of the Anglican Church of England, told the pope, “We know from experience that through committed dialogue, old suspicions can be transcended and a greater mutual trust established.”

“I know that reconciliation was a central theme in the life of Cardinal John Henry Newman, for whom you will be holding a Mass of beatification on Sunday. A man who struggled with doubt and uncertainty, his contribution to the understanding of Christianity continues to influence many,” she said.

Afterward, the queen introduced the pope to a long line of government officials and religious leaders. Among the first was British Deputy Prime Minister Nick Clegg, a declared atheist and the youthful leader of the Liberal Democrats.

The pope’s arrival coincided with St. Ninian’s Day, marking the feast of Scotland’s first saint and evangelizer. Traditional celebrations in honor of the fourth-century saint were resurrected this year, including a parade featuring the harmonic drone of more than 1,000 bagpipe players.

The parade concluded with the pope’s passage in his popemobile. Thousands of schoolchildren lined the parade route and cheered the pope, who was wearing his new tartan scarf over his shoulders. The bagpipers and drummers who had led the parade stepped to the sidewalks and played as the pope went by.

More than 150 protesters also were present, but did not disrupt the pope’s visit or the celebration of the crowds who came out to welcome him.

After the parade, the pope was treated to a traditional Scottish lunch at the residence of Cardinal Keith O’Brien of St. Andrews and Edinburgh; the menu featured “haggis” – a dish featuring chopped and spiced organ meat from sheep placed in a sheep’s stomach and cooked.

The pope’s arrival was carried live on British television, and his visit was expected to draw widespread media attention in a country often described as one of the least religious in Europe. A recent survey of religious attitudes carried out by the National Center for Social Research found that Britons generally fell into three groups of roughly equal proportion: firm believers, deep skeptics and the uncertain.

Church leaders, however, pointed to a poll released in early September that seemed to show more openness to Catholic teachings, especially in social areas. That survey found that significant majorities agreed with 11 of 12 statements contained in Pope Benedict’s 2009 encyclical, “Charity in Truth,” on topics ranging from human rights to the environment.

The theme of the papal visit to Great Britain – “Heart Speaks Unto Heart” – also reflects the organizers’ hope that Britons will listen to the pope and his message with an open heart and mind. If he gets a fair hearing, they believe, he’ll make an impact.