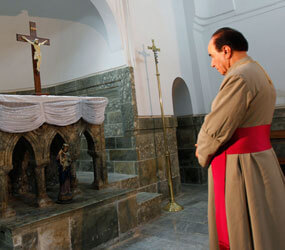 VATICAN CITY – Pope Benedict XVI urged the Iraqi leadership to work for the swift formation of a stable government and to protect the Christian minority in the country still torn by violence.

The pope made his appeal to the new Iraqi ambassador to the Vatican, Habbeb Mohammed Hadi Ali al-Sadr, as he presented his diplomatic credentials in a private audience July 2.

Pope Benedict praised the “great courage and determination” shown by Iraqi people who voted March 7 despite violence and intimidation at the polls. A national government has still not been formed, leaving the country in a political and security vacuum.

The pope urged that the new government be formed soon “so that the will of the people for a more stable and unified Iraq may be accomplished.”

He addressed the oft-repeated concern about the plight of Christian minorities in Iraq, many of whom have fled in the face of attacks and persecution. The pope said he hoped that conditions would improve so that they could “remain in their ancestral homeland, and that those who have felt constrained to emigrate will soon consider it safe to return.”

He acknowledged that both Muslims and Christians have suffered the consequences of the violence that has racked the country for years, but said he hoped that “this shared suffering can provide a deep bond” and promote mutual efforts for peace.

The pope also underlined the need for freedom of religion and freedom of worship to be protected by law but also thoroughly embraced as a culture.

Al-Sadr said the leadership was making efforts to convince Christians to stay and hoped that the pope “would exhort Christians in Iraq to stay rooted in their country and not give opportunities to the criminals who plot against them.”

The Iraqi state, he said, was doing its best to secure monasteries and churches throughout the country from terrorist attacks, “in measures even greater than for the mosques.”

He said Christians were guaranteed at least five seats in the parliament, full citizenship and the right to use their chosen language in schools.

He said Iraq had made great progress toward a democratic and tolerant society and urged the pope to “invoke nations and their rulers to stand beside Iraq and help it emerge from the present difficult conditions, united and fully healed.”

Iraqis, al-Sadr said, “have rejected the theory of the inevitability of a conflict of civilizations, and believe rather that the essence of religion lies in” human dignity.