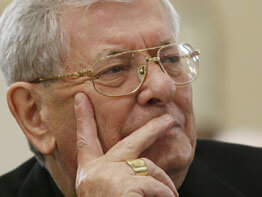 Archbishop Pietro Sambi, apostolic nuncio to the United States, confirmed the dates of the papal trip and announced the pope’s itinerary in remarks Nov. 12 at the beginning of the annual fall meeting of the U.S. bishops in Baltimore.

“Peter, the rock on which Jesus founded this church, will be among us in the person of his successor, Benedict the XVI,” Archbishop Sambi told the bishops.

The official title of the upcoming papal trip is “Apostolic Visit to the United States of America and to the Seat of the United Nations.”

According to the archbishop, the pope will arrive in Washington April 15 and will receive an official welcome at the White House April 16. That afternoon, coincidentally his 81st birthday, he will address the U.S. bishops.

The following day he will celebrate Mass at the new Washington Nationals baseball stadium in Washington. Later that day he will meet with directors of Catholic universities and colleges and diocesan educational leaders at The Catholic University of America in Washington and then he is to attend an interreligious meeting at the Pope John Paul II Cultural Center.

While in New York the pope will visit ground zero on the morning of April 20. Ground zero is the site where the twin towers of the World Trade Center stood before they were brought down by terrorist attacks Sept. 11, 2001.

Archbishop Sambi said the pope’s visit to ground zero will be in “solidarity with those who have died and their families and all who wish for an end of violence and the implementation of peace.”

In the afternoon, he will celebrate Mass at Yankee Stadium, which will be the final event of his U.S. trip.

Archbishop Sambi likened Pope Benedict’s visit to the United States next year to “a sign that the spirit of the Lord is with its church”; he also said he hoped the visit would provide a “new spring” and “new Pentecost” for the Catholic Church in this country.

He praised the U.S. bishops for “upholding the faith” and said the church in the United States showed “an impressive unity” among the faithful and church leaders.

The archbishop also noted the visit would mark a celebration of the beginning of the U.S. church and should demonstrate how the church in this country will continue to grow by “making all things new in Christ.”

The bishops gave Archbishop Sambi a standing ovation.
“This is a blessed moment for our nation,” said Bishop William S. Skylstad of Spokane, president of the U.S. Conference of Catholic Bishops. “Pope Benedict is not just the leader of Catholics, he is also a man of inspiration for all those who work for peace.”

Cardinal Edward M. Egan of New York said New York Catholics were looking forward to the papal visit. When they initially heard news of a possible visit, he said, there was “both rejoicing and thanksgiving.” he said.

The cardinal also noted that the pope would receive a “warm and prayerful welcome.”

Likewise, Washington Archbishop Donald W. Wuerl spoke of “faith-filled joy and enormous enthusiasm” of Catholics in the Washington Archdiocese for the pope’s visit.

“Personally, and in the name of all of the clergy, religious and faithful of the archdiocese, I express our warmest welcome while renewing our sentiments of love and loyalty to our holy father,” he said.

During a Nov. 12 press conference at the bishops’ meeting, Archbishop Wuerl said he thought the pope’s decision to visit Washington and New York represented a pastoral visit to the entire country.

He also acknowledged that after inviting the pope to Washington he “prayed very hard” that the pope would accept.

The archbishop called the upcoming visit “an enormous privilege” for the church of Washington and he said the archdiocese would work to make the visit “a moment of true spiritual renewal and a vibrant manifestation of God’s kingdom at work among us.”

“It will be an honor beyond measure,” he said, for the university to welcome the pope.