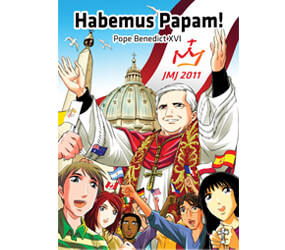 They are the stars of comic books done in a style older generations never saw in the comic-book rack at the neighborhood drugstore growing up. The genre is called manga, a Japanese genre of cartoons and comic books, and Jonathan Lin, who runs Manga Hero, may well be the world’s only publisher of Catholic manga comics.
A 32-page Pope Benedict manga comic will be distributed in August during World Youth Day in Madrid. Lin said he expects to have 300,000 copies produced in Spain to meet demand. He hopes it will whet World Youth Day participants’ appetites for a longer Pope Benedict manga to be produced this fall in the United States.

“I wanted to start my own business – something that could positively influence young people, who are especially influenced by media,” Lin told Catholic News Service in a June 3 telephone interview from San Rafael, Calif.
“I was talking to my parents. And my dad, who actually grew up in Japan, asked me, ‘How come there’s no biblical manga?’ And I was like, ‘Oh, yeah, that’s right. That’s a shame.’ There was only a couple written by Protestants and published by Protestants that basically converted the Bible into a manga series,” Lin said.
But it got Lin to thinking: “What stories are there out there that could actually work?”

The St. Paul and Judith mangas are already available for sale. Later this summer, Lin will have produced a manga telling the parable of the 10 virgins at the wedding feast from the Gospel of Matthew.

Lin explained the difference between mangas and “traditional” comics.
“The manga art style is totally different than the Western comics tradition,” he said. “The Japanese art style is more exaggerated – broadly defined hair, for example. Maybe big eyes. The framing of the scene can be quite different.

“The sense is that traditional comic books of the Fifties and Sixties everything was quite linear. In manga the action may be more disjointed. Put it this way: The action sequences could all be happening all at one time, in one frame. Or you could have multiple scenes going on in multiple frames. This style has been adopted in Western graphic novels as well,” Lin said.

Lin, 36, is a real estate broker and uses his earnings to provide seed money for his mangas, which can be viewed at www.mangahero.com. He was in Sydney for World Youth Day in 2008 and plans to be in Madrid to oversee the manga distribution of the Pope Benedict comic.

Still, Lin does not do it all by himself. He recruited two writers from John Paul the Great Catholic University in San Diego. (The school also supplied Lin with a grant to produce the 300,000 World Youth Day mangas.) And a full-time manga artist in Singapore does Lin’s manga artwork.

One of Lin’s writers, Gabrielle Gniewek, 21, plans to graduate in September with a degree in entertainment media. “When I got here, I really got into the whole Japanese manga thing,” she told CNS in a June 5 telephone interview.
“I was searching for a job as a student to pay the grocery bills,” Gniewek added. “I was known as ‘the Japanese girl.’ … I was in charge of the anime (a Japanese style of animation) club at school” when Lin posted flyers looking for a Catholic manga artist.

“They all knew who I was and what I was doing. I applied for the job and Jonathan came and interviewed me. He really liked what I did. He picked me up and we went on from there,” Gniewek said. “It’s such a narrow, niche market that he was looking for a Catholic manga artist. … I thought, ‘Wow, this is right up my alley. … That, I think, was a little gift from God.”

Matt Salisbury got an entertainment media bachelor’s degree at John Paul the Great, then a master’s in film and television producing. “I wasn’t too familiar with it (manga) as a genre but when I looked at it was interesting,” said Salisbury, whose background is in screenwriting.

Although he had never written manga comics until Lin brought him on, Salisbury said, “I really enjoyed not having to worry about the budget of what you’re portraying.” He added he had written the first part of the Pope Benedict manga but then passed it on to Gniewek when his career started heating up.

Lin said it takes Manga Hero about three to four months to get a comic from the idea stage to the finished product.

“We have others being written – Joshua, and then we have another one on Pope John Paul II, Mother Teresa, St. George. These are all in the writing stage,” Lin said. “And then we have an epic on David.”

Even though most of Lin’s manga talent has its base in San Diego, he hasn’t ever gone to Comic Con, the annual convention held in San Diego for comic books and cartoons. “It’s really quite expensive to get a booth,” he said. “Maybe someday.”