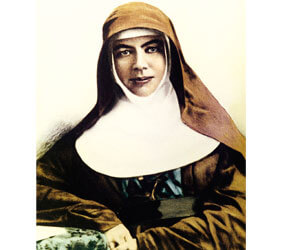 VATICAN CITY – Pope Benedict XVI will create six new saints Oct. 17, including Blessed Mary MacKillop, who will be Australia’s first saint, and the Canadian Blessed Andre Bessette, who will be the first saint of the Holy Cross Brothers.

The pope announced the date for the canonization ceremony at the end of what is known as an ordinary public consistory, a very formal ceremony opened and closed with prayer, during which cardinals present in Rome express their support of the pope’s decision to create new saints.

Archbishop Angelo Amato, prefect of the Congregation for Saints’ Causes, read brief biographies of the six in Latin.

Although her sainthood cause was initiated in the 1920s, it faced some serious hurdles, not the least of which was her brief excommunication and the temporary disbanding of her religious order.

Sister MacKillop and other members of the order were committed to following poor laborers into remote areas of the country in order to educate their children. But local church officials disapproved of the sisters living in isolated communities, often cut off from the sacraments.

Within a few months, the bishop who had excommunicated her lifted his censure and a church commission cleared the sisters of all wrongdoing.

Blessed Bessette founded St. Joseph’s Oratory of Mount Royal in Montreal and was known for his intense piety, famed for miraculous cures and praised for his dedication to building the shrine to honor St. Joseph.

Born Alfred Bessette Aug. 9, 1845, in Saint-Gregoire d’Iberville, Quebec, he suffered from a chronic stomach ailment that kept him out of school and often without work.

At 25, Blessed Andre could not read and his health was so fragile the Holy Cross brothers assigned him to be the doorman at Montreal’s College of Notre Dame, where the congregation had just opened its novitiate. He once commented, “When I joined this community, the superiors showed me the door.”

The others to be canonized Oct. 17 are:

– Blessed Stanislaw Soltys Kazimierczyk, a Polish-born member of the Canons Regular of the Lateran, who lived 1433-1489. He was famous as a preacher and confessor.

– Blessed Juana Josefa Cipitria Barriola of Spain. The nun, who died in 1912, founded the Daughters of Jesus.

– Blessed Giulia Salzano, the Italian founder of the Catechetical Sisters of the Sacred Heart of Jesus; she died in 1929.

The Poor Clare’s path to canonization was unusual. A formal beatification ceremony was never held for her, but in 1843 Pope Gregory XVI recognized centuries of devotion to her and gave her the title blessed. In 2005, Pope Benedict recognized that she lived a life of heroic virtues – usually the first step before beatification and canonization – and in December he issued the decree recognizing a miracle attributed to her intercession.