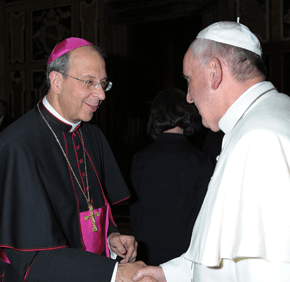 By Cindy Wooden
Catholic News Service
VATICAN CITY – Pope Francis thanked the Knights of Columbus for being in solidarity with him, something he said is seen not only in the money they give for his charities, but also in their prayers, sacrifices and charitable activities.
“May prayer, witness to the faith and concern for our brothers and sisters in need always be the pillars supporting your work, both individually and corporately,” the pope said Oct. 10 during a meeting with 80 officers and members of the board of directors of the Knights of Columbus.
Before meeting with and addressing the group, Pope Francis met privately with Supreme Knight Carl Anderson, who serves on a number of Vatican-related bodies, including the board of supervisors of the Vatican bank.
The U.S.-based Knights of Columbus, a Catholic fraternal organization, has about 1.8 million members in the United States, Canada, the Philippines, Mexico, Poland, the Dominican Republic, Puerto Rico, Panama, the Bahamas, the Virgin Islands, Cuba, Guatemala, Guam and Saipan.
Pope Francis thanked the Knights for their Vicarius Christi Fund, which they established in 1981; the annual earnings on the fund are donated to the pope for his personal charities.
He also encouraged them to “continue to seek new ways of being a leaven of the Gospel and a force for the spiritual renewal of society.”
The pope ended his audience with the Knights by entrusting them to St. Joseph, “the protector of the Holy Family of Nazareth, who is an admirable model of those manly virtues of quiet strength, integrity and fidelity which the Knights of Columbus are committed to preserving, cultivating and passing on to future generations of Catholic men.”
See also:
Pope Francis praises diversity of the church
Copyright (c) 2013 Catholic News Service/U.S. Conference of Catholic Bishops
PrevNext