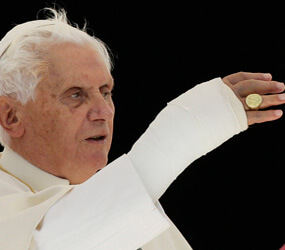 ROMANO CANAVESE, Italy – Pope Benedict XVI thanked the doctors who treated his broken wrist and thanked everyone who prayed and expressed their concern for him.

Before reciting the Angelus prayer in the town of Romano Canavese in northern Italy July 19, the pope greeted thousands of the faithful gathered outside the town’s parish church, waving enthusiastically even though his right arm was encased in a plaster cast.

“As you can see, because of an accident, my mobility is a bit limited, but my heart is fully present,” he assured the crowd.

The pope traveled about 50 miles by helicopter and car from Les Combes, where he has been vacationing, to Romano Canavese, the hometown of his secretary of state, Cardinal Tarcisio Bertone.

“I offer my heartfelt thanks to everyone – and there are many of you – who have demonstrated your closeness, your sympathy and your affection for me and who have prayed for me,” he said.

The pope fractured his right wrist after he accidentally fell during the night of July 16-17 in the residence where he has been vacationing since July 13.

Using local anesthesia, doctors at the nearby hospital in Aosta performed minor surgery to stabilize and join the ends of the dislocated broken bones with wires.

Doctors in Aosta told reporters the pope was in good condition and that he would probably have to wear the cast for a month. He was released a few hours later July 17.

During his first public appearance after his accident, the 82-year-old pope used his right arm to wave and even wiggled his still slightly swollen fingers. The swelling has gone down enough to allow him to put the papal fisherman’s ring back on his right hand. He shook hands with well-wishers with his left hand.

Pope Benedict’s brief trip to Romano Canavese was designed to pay homage to his “closest collaborator,” Cardinal Bertone, who was secretary of the Congregation for the Doctrine of the Faith when its prefect was the pope, then-Cardinal Joseph Ratzinger.

“I am truly happy to be able to pay him homage today coming to his hometown, where many people surround him with affection,” said the pope.

The pope noted the many vocations that have come from the small town, especially for the Salesian community, to which Cardinal Bertone belongs. The pope said the numbers should serve to encourage the diocese to continue its dedication to education and vocations formation.

The mayor of Romano Canavese gave the pope a notebook-sized portable computer. The right-handed pope was especially pleased and later publically thanked him for “the very beautiful gift.”

Cardinal Bertone told the Italian news agency ANSA that the broken wrist would make it difficult for the pope to use his Alpine vacation to continue work on the second volume of his book about Jesus.

The Vatican spokesman, Jesuit Father Federico Lombardi, said in a written statement that the pope was “learning how to live with the right wrist in a cast.”

The most difficult thing for the pope to get used to, the spokesman said, “is having to give up writing by hand, something he intended to do frequently” during his July 13-29 vacation.