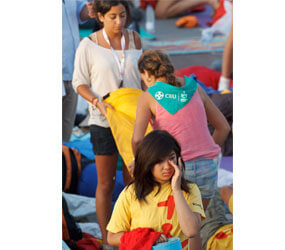 MADRID – Pope Benedict XVI saw that 1.4 million young people could be buffeted by gusty winds and drenched by a driving rain and still fall silently to their knees to adore the Eucharist.

At the final Mass closing World Youth Day Aug. 21 in Madrid, the pope challenged the Catholic pilgrims to take that faith, make it grow and share it with the world.

Despite the hardships of getting to the Cuatro Vientos military air base in blistering heat Aug. 20 and the downpour during the nighttime vigil with the pope, hundreds of thousands of young people from around the world spent the night on the open field, praying, singing and perhaps trying to snatch a few hours’ sleep.

But they were up, ready and rowdy when the pope arrived for the morning Mass.

In his homily, he said, the vision of that sea of happy souls “fills my heart with joy.”

“I think of the special love with which Jesus is looking upon you. Yes, the Lord loves you and calls you his friends,” the pope told the young.

To the joy of the crowd, particularly the Brazilians present, at the end of the Mass, the pope announced that the next international gathering of World Youth Day would be held in Rio de Janeiro in 2013.

In his homily at the Mass, Pope Benedict said faith is not about understanding a bunch of facts, “it is an ability to grasp the mystery of Christ’s person in all its depth.”

Even if it feels like a struggle at times, faith is not primarily about people working out their thoughts about God; it starts with the gift of God’s love and God’s reaching out to each person, he said.

Faith entails “a personal relationship with Christ, a surrender of our whole person, with all our understanding, will and feelings,” he said.

But the pope went even further, telling the young that a personal relationship with Jesus always must be transformed into action, service and love for others. In addition, it must be lived within the church, the community of believers to whom Jesus entrusted his message and his mission of salvation.

“We cannot follow Jesus on our own,” he said. Those who try “approach the life of faith with the kind of individualism so prevalent today” and risk not encountering the real Jesus or “following a counterfeit Jesus,” he said.

Christ asks each person, “Who do you say that I am?” the pope said.

“Respond to him with generosity and courage, as befits young hearts like your own,” he told the young.

“Let me urge you to strengthen this life of faith which has been handed down from the time of the apostles,” he said. “Make Christ, the Son of God, the center of your life.”

Pope Benedict told the young people, who had been texting, tweeting and posting Facebook updates about their adventures, that whenever we really “like” anything, we share it, and that must hold true for faith as well.

“You, too, have been given the extraordinary task of being disciples and missionaries of Christ in other lands and countries filled with young people who are looking for something greater,” the pope said.

Share the faith, he said, and help them see they are right when “their heart tells them that more authentic values do exist” and they resist being “seduced by the empty promises of a lifestyle which has no room for God.”

Even before Mass began, officials of World Youth Day broadcast another challenging message to the crowd, telling them that most pilgrims would not be able to receive Communion during Mass and asking them to offer it up as a sacrifice for the pope.

Jesuit Father Federico Lombardi, Vatican spokesman, said the plan was to distribute Communion from 17 eucharistic chapels set up on the perimeter of the airfield. The storm Aug. 20 destroyed several of the chapel-tents, and police asked organizers to dismantle most of the others because they posed a danger in the wind.

Canadian Bishop Donald Bolen of Saskatoon, Saskatchewan, joined about 80 pilgrims from four groups in his diocese.

He said the pilgrims found the whole experience “enjoyable and meaningful, and in some instances, transformative. Will they pray daily, celebrate the sacrament of reconciliation frequently, help those who suffer, and take time to discern their vocation?

“I think if you asked them now, many of them would say yes, they will try,” he said. “It is my profound hope that the experiences of the past two weeks will stay with them, and that the experience of God’s presence and of the church which they have felt here will be the seedbed for a deepening commitment to Christian discipleship. But as with all of us, time will tell.

“Many of the youth have already shown signs of serious commitment to a life of Christian discipleship; others are certainly searching. There is no doubt, however, that the experience of World Youth Day is a gift for both those already committed and those still searching,” he said.

James Arblaster of Woodland, Australia, told Catholic News Service he struggles with the church’s teaching on the theology of the body and the church’s stance on homosexuality.

“I’ve been able to attend catechesis and learn about more of the in-depth arguments for different (teachings the church has). That has assisted in explaining a lot of positions, although I still remain unconvinced on homosexuality,” he said.

Arblaster said one of the priests at confession also helped clear up some of the church’s teachings on sexuality for him.

Brigette Liss, a 26-year-old from Chicago, said she has a difficult time attending church every Sunday while working.

“This experience has helped me come back to Mass and see how important it is to keep up on your faith and be sure that every day you take time out to pray and think of God,” she said.

Liss said it was the catechesis and the witness of so many young people alive in their faith – “wearing it on their sleeves” – that helped her. She also went to confession for the first time in four years.

Father Loreto “Bong” Rojas, pastor of St. James Parish in Davis, Calif., traveled to Madrid with 33 youths, ages 14-24, from the Diocese of Sacramento.

He said just the way they handled the hardship of getting to Cuatro Vientos – squashed like sardines on the Metro and walking miles in the heat – shows they got the message, especially about charity.

“They may not be able to verbalize it on a theoretical level, but on a practical level, they are there,” he said. “It’s very real. We’re a big group and they are very mindful of each other. Some were not up to the walk and others, who wanted to experience the 8-kilometer (5-mile) walk, volunteered to stay with them.”

“We are proud of our Catholic identity. This is who we are. It is what we wanted people to know and what we shared,” he said. “It was really moving how people participated.”

Contributing to this story was Gretchen R. Crowe in Madrid.