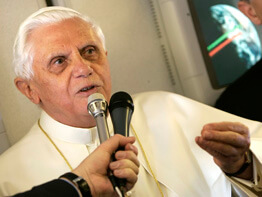 ABOARD THE PAPAL FLIGHT TO BRAZIL – On the plane taking him to Brazil, Pope Benedict XVI called Latin America “the continent of life and hope” and said the church must keep up the fight against abortion, poverty and injustice.

Speaking to reporters aboard his chartered Alitalia jet May 9, the pope spent more than 25 minutes answering questions, his longest in-flight press conference to date.

He said the late Salvadoran Archbishop Oscar A. Romero deserves to be beatified, denounced the Latin American drug trade and said liberation theology has changed with the political times.

In remarks about the recent legalization of abortion in Mexico, the pope appeared to support Mexican church leaders who held out the possibility of excommunication for Catholic legislators who voted for the legislation.

Asked whether he agreed with the excommunication penalty, the pope answered: “Yes, these excommunications were not something arbitrary, but are foreseen by the Code (of Canon Law). It is simply part of church law that the killing of an innocent baby is incompatible with being in communion with the body of Christ.”

Jesuit Father Federico Lombardi, the Vatican spokesman, told reporters that the pope was not announcing a new policy on Catholic politicians. He also noted that the Mexican bishops had not announced the excommunication of anyone.

“And if the bishops haven’t excommunicated anyone, it’s not that the pope wants to do so,” Father Lombardi said.

He said the pope was only reiterating the teaching that Catholic legislators who promote initiatives like the legalization of abortion exclude themselves from the conditions needed to participate fully in the Eucharist.

In recent weeks a number of statements on the possible excommunication of the legislators who approved Mexico City’s abortion law have been issued by the Archdiocese of Mexico City and bishops across the country. The new law legalized abortion in Mexico City during the first 12 weeks of pregnancy.

Carlos Villa Roiz, a spokesman for Mexico City Cardinal Norberto Rivera Carrera, told Catholic News Service May 9 that the Mexican church did not yet have an official position on the matter.

Immediately before the law’s approval April 24, local press quoted a Mexico City archdiocesan statement that said when the law took effect “any baptized assembly members will automatically be excommunicated and therefore be excluded from the Catholic Church.”

However, Cardinal Rivera backed off this stance May 6, saying that excommunication was not necessary.

“The only official position of the archdiocese is the one the cardinal announced on Sunday,” Villa said. “During Mass, he said that he hadn’t considered excommunicating anyone.”

Villa added that Mexican clergy were still debating whether the lawmakers had been excommunicated “latae sententiae,” meaning excommunication may have been automatic following their vote, with no need for a formal church declaration.

He said Mexican church officials would be ready to follow any orders from the pope.

“When Rome speaks, the discussion is over,” Villa said. “Even if Cardinal Rivera hasn’t excommunicated them, the pope is making it understood that the legislators have committed a serious, mortal sin.”

The pope stood at the front of the coach section of the plane, facing the approximately 70 journalists aboard. He was on his way to Sao Paulo for pastoral events and to Aparecida to open the Fifth General Conference of the Bishops of Latin America and the Caribbean.

The pope said the growing popularity of evangelical sects in the region underlined the fact that Latin Americans thirst for God and should spur the Catholic Church to be “more missionary and more dynamic” in responding to this thirst.

Asked about the beatification cause of Archbishop Romero, who was gunned down while celebrating Mass in 1980 in San Salvador, the pope said he was “certainly a great witness of the faith, a man of great Christian virtue who worked for peace and against the dictatorship.”

“That the person himself merits beatification, I do not doubt,” the pope said. But he said problems had been created when some groups unjustly tried to co-opt Archbishop Romero as a political figure. He added that work on the beatification cause was proceeding.

As head of the Vatican’s Congregation for the Doctrine of the Faith, the pope helped prepare documents in the 1980s critiquing liberation theology. He said the church primarily was concerned at the time with an illegitimate mixing of church and politics which tended to hide the religious mission of the church.

The Vatican’s documents “were not aimed at destroying the commitment to justice but at guiding it along the right path,” he said.

He said the question remains: How should the church be involved in the struggle for necessary reforms and just living conditions?

“On this point theologians are naturally divided – and not only theologians,” he said.

The pope said the widespread problems of drugs and violence in Latin America are tied in part to economic factors – including markets that exploit small farmers in order to make huge profits elsewhere.

But he said the core problem in Latin America is lack of hope in the future. It’s the church’s role to bring this hope in the person of Jesus Christ, he said.
In the wider society, he said, the church should not play a direct, institutional role in politics, but needs to indicate the guidelines and values that can generate solutions to the grave social problems of Latin America.

Ultimately, he said, education in the faith is the surest method to end violence, poverty and injustice in the region.

The pope said he came to Brazil and Latin America with a great sense of hope and a determination to help the church mobilize the “moral forces” of the continent.

He said he realized that not everyone was open to the church’s message, but added: “I hope many will listen and many will be convinced.”

– – –
Contributing to this story was Jonathan Roeder in Mexico City.