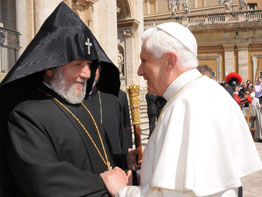 “If our hearts and minds are open to the Spirit of communion, God can work miracles again in the church, restoring the bonds of unity,” the pope said May 9 during a prayer service with Catholicos Karekin II, patriarch of the Armenian Apostolic Church.

Some 100 Armenian pilgrims from around the world joined Pope Benedict and the Armenian bishops for the midday prayer service in the Clementine Hall of the Apostolic Palace; afterward, the patriarch joined the pope for lunch.

Speaking during the prayer service, Pope Benedict looked toward the May 11 celebration of Pentecost, saying, “We will pray earnestly to the Father, asking him to send his Holy Spirit, the Spirit whose task it is to maintain us in divine love and lead us into all truth.”

The pope said that while the path to restoring Christian unity appears long and difficult and there are “deep and painful divisions” still needing to be healed the Holy Spirit can unite people as occurred on the first Pentecost.

The Spirit “can open doors that are locked, inspire words that have been forgotten, heal relations that are broken,” he said.

Pope Benedict prayed that the work of the international Catholic-Oriental Orthodox theological dialogue “will bring us closer to full and visible communion and that the day will come when our unity in faith makes possible a common celebration of the Eucharist.” The Armenian Apostolic Church is an Oriental Orthodox church.

The pope also praised the Armenian Orthodox for the “remarkable pastoral results that have been achieved” since the breakup of the Soviet Union.

Catholicos Karekin raised political questions that the pope did not. He said the people of Armenia are suffering from the results of an embargo imposed by Azerbaijan and Turkey related to ongoing tensions in the region, specifically the independence efforts by ethnic Armenians in Nagorno-Karabakh, an enclave in Azerbaijan.

Turning to the importance of ecumenical relations, Catholicos Karekin said, “Faithful to the holy church fathers and their legacy, despite our differences and unique characteristics, we shall place greater importance on that which unites us.”

While theological differences remain, he said, Christians have an obligation to work together because “many environmental, social, political, economic and moral issues urgently need attention.”

“True respect for life and man and love for God is diminishing,” he said. “Only through inclusive cooperation shall we be able to better serve the establishment of peace in the world and to better defend human rights and the rights of nations, families and those classes of society which are at risk,” he said.

Speaking to reporters after his lunch with the pope, Catholicos Karekin said his visit was a further example of “that warm atmosphere of love and respect” that exists between Catholics and Armenian Orthodox.

The warm relations, he said, are found not simply between church leaders, “but also among the communities, parishes and dioceses throughout the world.”

Archbishop Avak Asadourian, primate of the Armenian Apostolic Church in Iraq, was asked about the situation of the faithful in his violence-torn country.