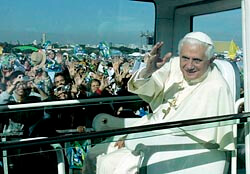 GUARATINGUETA, Brazil – In a meeting with recovering Brazilian drug addicts, Pope Benedict XVI said drug dealers will face God’s judgment for the damage they have inflicted on individuals and society.

The pope made the remarks during a visit May 12 to Fazenda da Esperanca, or Farm of Hope, a church-run drug rehabilitation center in rural Brazil.
After listening to emotional testimonials from young men and women who have struggled to break free of drug and alcohol dependency, the pope urged those helped by the center to become “ambassadors of hope” to other addicts.

The pope said the statistics on drug abuse in Brazil were alarming and that the rest of Latin America is not far behind.
“I therefore urge the drug dealers to reflect on the grave harm they are inflicting on countless young people and on adults from every level of society,” he said.

“God will call you to account for your deeds. Human dignity cannot be trampled upon in this way,” he said.

The pope spoke from a thatch-roofed platform to about 3,000 people who gathered on the grounds of the 40-acre farm, where residents grow vegetables and raise livestock.

The pontiff arrived after a long drive deep into the heart of the southern Brazil countryside, where rich valleys alternated with wooded hills. Farmsteads along the route decorated their driveways in yellow and white, the Vatican colors.

The Farm of Hope was founded in 1983 by a German Franciscan, Father Hans Stapel. Today, it is a movement with 33 centers around the world, helping drug addicts, unwed mothers, homeless and young people infected with HIV.

The main center near the Brazilian city of Guaratingueta ministers to about 100 addicts. Many of them arrive there after trying and failing with other rehab treatments.
Filipe Kenji Diniz, a 27-year-old from Curitiba who sat near the papal stage, said he tried for 12 years to kick his drug habit, which began with alcohol and ended with crack cocaine. He entered three hospital programs and took substitute chemicals, but it did not work, he said.

He had heard about Farm of Hope, so he decided to try it.

“Here the method was different,” he said.
“I learned to talk to God – to pray. And when I talked to God, I found that I stayed very calm, and I didn’t need the drugs anymore,” he said.
Five men and women stood before the pope and read testimonials about their experience at the farm. Antonio Eleuterio Neto described how his drug addiction since age 12 was broken when he was offered friendship and trust and was able to discover the importance of God in his life.

After the young man spoke, the pope gave him a hug.
Sylvia Hartwich, a 20-year German immigrant, cried when describing her struggle with drugs and anorexia, which she overcame after being approached by three members of Farm of Hope.
Today, she works as a volunteer in a German branch of the movement.
Ricardo Correa Ribeirinha, the son of a prostitute, told of his personal experiences of sniffing glue, taking cocaine and smoking crack, and of the devastation caused society by the drug trade and the violence that surrounds it.

People thought he would end up in jail or in an early grave, but he broke free after joining Farm of Hope, he said.

In his talk, Pope Benedict praised the center’s approach of combining medical and psychological assistance with prayer, manual work and personal discipline. When dealing with addiction, he said, it was important to treat the soul as well as the body.
The personnel at the center, he emphasized, are carrying out a work of conversion as well as rehabilitation.
Farm of Hope says its success rate with addict rehabilitation is more than 80 percent, far better than other similar programs in Brazil.
Before leaving, the pope gave a gift of $100,000 to the center.