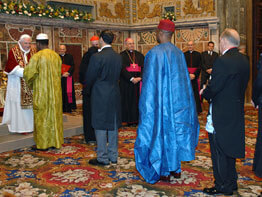 VATICAN CITY – Teaching young people the skills they need to support their future families and the moral values to inspire them to work for the common good is essential in the fight against violence and despair, Pope Benedict XVI told seven new ambassadors to the Vatican.

The pope spoke separately Dec. 13 to ambassadors from Thailand, Singapore, Seychelles, Namibia, Gambia, Suriname and Kuwait as he accepted their credentials.

In a group talk the same day, he asked that each country make education a priority. Giving young people the power to read and marketable skills is an important way to break the cycle of poverty and “fight against the despair that may lie in young people’s hearts and be the source of numerous acts of violence,” the pope said.

But education also must include the handing down of human and moral values so that every young person has “confidence, hope in the future, concern for his brothers and sisters,” and the desire to help his nation and community, he said.

In a speech to Namibia’s new ambassador to the Vatican, Peter Hitjitevi Katjavivi, the pope recognized the “alarming” and “tragic toll” HIV/AIDS has had in southern Africa.

“The church’s contribution to the goal of eradicating AIDS from society cannot but draw its inspiration from the Christian conception of human love and sexuality,” Pope Benedict said.

Abstinence before marriage and fidelity within marriage prompt “the most effective behaviors for preventing the sexual transmission of disease,” he said.

The pope made a similar point speaking to the ambassador of Gambia. He said, “Promiscuous sexual conduct is a root cause of many moral and physical ills and must be overcome by promoting a culture of marital faithfulness and moral integrity.”

In his address to the ambassador of Thailand, Chaiyong Satjipanon, the pope lamented “the scourge of AIDS, prostitution and the trafficking of women and children” in the region.

While poverty is a major factor, he said, “the decline in moral values, fueled by the trivialization of sexuality in the media and entertainment industries, leads to the degradation of women and even the abuse of children.”

“This unspeakable human exploitation” calls for international action and “unbending domestic political resolve to confront the corruption and impunity which facilitate such crimes,” he said.

Speaking to Urmila Joella-Sewnundun, Suriname’s new ambassador, the pope encouraged this South American nation and its neighbors to put an end to “the disturbing trend of international drug trafficking.”

Eradicating the problem of drug abuse entails cutting off the drug trade at its sources and “combating the factors that drive people to self-abusive behaviors, especially poverty, the breakdown of the family and social disintegration,” said the pope.

In his address to Barry Desker, Singapore’s new ambassador, the pope noted the “tragic escalation in international terrorism, often linked to religious motives.”

He said the Vatican “rejects the manipulation of religion for political purposes and especially the attempt to justify violence in this way.”

He said individual nations should implement international humanitarian law and other global peacekeeping initiatives as a way to combat this new threat to world peace.