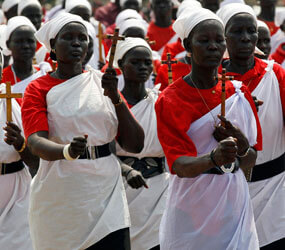 VATICAN CITY – Pope Benedict XVI named an official delegation to represent him at the July 9 independence celebrations in Southern Sudan and charged members with conveying his hopes for “peace and prosperity” to citizens of the world’s newest nation.

The Vatican “invites the international community to support Sudan and the new independent state so that, in a frank, peaceful and constructive dialogue, just and fair solutions can be found for the questions that are still unsolved,” Jesuit Father Federico Lombardi, Vatican spokesman, said in a statement July 8.

He also said the Vatican wishes the people of both North and South “a path of peace, freedom and development.”

Father Lombardi said the Vatican’s foreign minister met July 7 with a delegation from the Sudanese parliament, led by Ahmed Ibrahim el-Tahir, president of the Sudan National Assembly, its lower house.

Archbishop Dominque Mamberti, the foreign minister, told the delegation from the North that “peace, reconciliation and respect for the rights of all, particularly (respect for) religious freedom, represent the fundamental pillars on which to build the new socio-political order of the region and are the conditions needed for looking to the future with hope,” Father Lombardi said.

The Vatican spokesman also said that if Southern Sudan requests it, the Vatican would seriously consider establishing full diplomatic relations with the new country, which will be named the Republic of South Sudan.

In a referendum in January, nearly 99 percent of the residents of Southern Sudan voted to secede from Sudan. The South’s yearning for independence led to more than 20 years of war with forces from the North.

While the official proclamation of independence was set for midnight July 9 and Sudan’s President Omar al-Bashir was scheduled to attend independence festivities in Juba, Southern Sudan, the new country and al-Bashir’s government still have to finalize the new border and decide if and how they will divide Sudan’s debts and its oil revenues.

In an interview July 7 with Fides, the Vatican’s missionary news agency, Bishop Edward Hiiboro Kussala of Tombura-Yambio, Southern Sudan, said one huge problem facing the South is the return of hundreds of thousands of Southern Sudanese who had moved to the North in search of peace and work.

Since October, Fides said, some 300,000 people have returned to the South.

“In May, according to the census conducted, in my diocese alone 7,000 people returned from the North, but the number is expected to grow in the coming months,” Bishop Kussala said.

The bishops of Southern Sudan have been assured that the government will help find jobs for teachers, engineers and skilled workers from the North, he said.

“Plots of land to cultivate and … to build their homes will be assigned to those who do not have special skills,” the bishop added.

Fides said the new nation also must deal with ongoing violence in some areas.

In the Diocese of Tombura-Yambio the insecurity is caused primarily by the presence of the guerrillas of the Lord’s Resistance Army.

Despite these problems, “in my diocese there is a festive atmosphere, streets and houses are being cleaned,” Bishop Kussala said.

On July 6 “there was a moment of prayer to ask God’s help for the new state,” he said. “Everyone is talking about independence and, despite the problems, no one is afraid of the future, and hopes are high.”

Cardinal Gabriel Zubeir Wako of Khartoum, the North’s capital, told Vatican Radio July 8 that the people of Sudan – North and South – spent the eve of independence day gathering together, fasting and holding prayer vigils scheduled to last throughout the night. He said they would break their fast at dawn July 9 to symbolize the fact that they have produced something new.

Each diocese has or will hold religious celebrations with dance and song to thank God and to acknowledge those who have spent decades working for peace, he said.

“With this celebration of independence we are saying goodbye to the past and embracing a new thing – without fighting – a new future of reconciliation, solidarity and forgiveness,” the cardinal said.