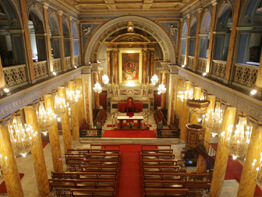 ANKARA, Turkey (CNS) — Pope Benedict XVI asked for prayers for his pilgrimage to Turkey, as the Turkish government announced unprecedented security measures to protect the pontiff and the Vatican confirmed the pope would visit a mosque during his trip.

A demonstration against the visit in Istanbul, meanwhile, drew a smaller-than-expected crowd of anti-pope protesters.

In Ankara, where the pope was scheduled to arrive Nov. 28, government officials played down tensions and predicted the papal visit would help advance Christian-Islamic dialogue.

In a last-minute addition to the papal schedule, the Vatican said the pope would stop briefly Nov. 30 at Istanbul’s renowned Blue Mosque as a sign of respect toward Muslims. He will become the second pope in history to enter a Muslim place of worship; Pope John Paul II visited a mosque in Syria in 2001.

The Vatican also confirmed that the pope would meet with Turkish Prime Minister Recep Tayyip Erdogan upon arriving at the Ankara airport, just before Erdogan leaves the country for a NATO summit.

Erdogan had said earlier that he would be unable to fit in a papal meeting, which was viewed by many as a diplomatic snub. Vatican spokesman Father Federico Lombardi said the fact that the prime minister was making a special effort to meet the pope was a “very positive sign.”

Speaking from his apartment window at the Vatican Nov. 26, the pope said he wanted to express sentiments of “esteem and sincere friendship” toward the people and leaders of Turkey, a country rich in history and culture.

He said he was anticipating with great emotion his encounters with the small Catholic community in Turkey and with leaders of the Orthodox Ecumenical Patriarchate in Istanbul.

Noting that Pope John XXIII had been a papal nuncio in Turkey for 10 years, the pope invoked his predecessor’s “heavenly protection” for the four-day visit.

“I ask all of you to accompany me with prayer, so that this pilgrimage can bring all the fruits that God desires,” he said.

As the pope made his remarks, demonstrators were gathering in Istanbul to protest the papal visit. Sponsored by the Saadet (Felicity) Party, the event drew some 20,000 people, far fewer than organizers had expected.

Marchers carried placards in English, including several that read: “No to the crusader’s alliance.” After a government warning, the organizers moderated the title of the rally, which had originally referred to the “sly and ignorant pope.”

Ultranationalist newspapers in Turkey have portrayed the papal visit as an attempt to form a strategic partnership between the Vatican and the Ecumenical Patriarchate, as part of a Christian alliance against Islam.

Some of the protesters in Istanbul made reference to Pope Benedict’s September speech in Regensburg, Germany, in which the pope quoted a medieval emperor’s critical assessment of Islam. The pope later clarified that he did not agree with the critique and expressed regret that Muslims had taken offense.

The protest in Istanbul had a distinctly political tone, with a number of signs denouncing the United States and Israel.

Several days earlier, police detained 39 demonstrators who shouted anti-pope slogans inside the Hagia Sophia Museum, a former Byzantine church and mosque. Some in Turkey see the pope’s scheduled visit to Hagia Sophia as an attempt to reclaim it as a church.

Turkish Foreign Minister Abdullah Gul said Nov. 26 that the security measures being taken to protect the pope were greater than those arranged for President George W. Bush when he came to Turkey in 2004.

“To protect His Holiness and guarantee the orderly visit of an illustrious guest, the leader of a billion believers, we will deploy our entire security forces, no one excluded,” Gul said.

Gul added that he thought the papal visit would go well and would help “erase the misunderstandings between the Islamic and Christian worlds.”

Polls appearing in the Turkish press showed that about one-third of those questioned were strongly against the papal visit, about 10 percent were in favor of it, and more than half had no opinion or were indifferent.

Pope Benedict has been largely portrayed in Turkish media as an opponent of Turkey’s entry into the European Union. As a cardinal, the pope said that in a cultural sense, Turkey had always represented “another continent, in permanent contrast with Europe.”

But in the days before the papal visit, church officials emphasized that the Vatican was not opposed to EU membership for Turkey.

“If Turkey fulfills its obligations and meets the requirements of the EU criteria, why shouldn’t it become a full member of the EU?” Father Lombardi, the Vatican spokesman, said in an interview with Turkey’s Anatolia news agency.

Cardinal Tarcisio Bertone, Vatican secretary of state, echoed those remarks, saying the Vatican had no position on Turkey’s place in the European Union.

“The hope is that Turkey can truly realize the conditions placed by the European community for access and integration into the community,” Cardinal Bertone said.

One of the European conditions is that Turkey offer greater protection of religious rights. On Nov. 24, two Turks who converted to Christianity went on trial for insulting the nature of the Turkish state and inciting hatred against Islam while trying to convert others to Christianity. They could face up to nine years in prison if convicted.

The pope is expected to raise the issue of religious rights in Turkey, said Vatican sources.