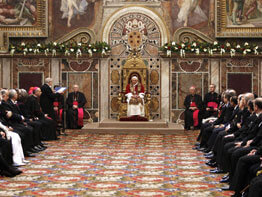 In an annual address to the diplomatic corps at the Vatican Jan. 8, the pope also appealed on behalf of Christian minorities in places like Iraq and India, urging governments to respond firmly to a recent increase in anti-Christian violence and discrimination.

After delivering his speech in the ornate Sala Regia, the 81-year-old pontiff greeted the diplomats one by one and posed for group photos. Among the representatives was the U.S. ambassador to the Vatican, Mary Ann Glendon, who was leaving her post Jan. 19.

The pope’s speech, sometimes called his “state of the world” address, reviewed developments on several continents, from the refugee crisis in central Africa to the recent military offensive in the Gaza Strip. The pope decried terrorist attacks that have “sown death and destruction” in countries like Afghanistan, Pakistan, India and Algeria, but also found hopeful signs in places like the Philippines, where the government and rebels have opened new negotiations.

Taking up the theme of his recent World Peace Day message, he told the diplomats that “to build peace we must give new hope to the poor.” In the current “sensitive phase of the history of humanity,” he said, moral and ethical principles are crucial to improving the condition of millions of people living in precarious situations.

“How can we not think of so many individuals and families hard pressed by the difficulties and uncertainties which the current financial and economic crisis has provoked on a global scale?” he said. He noted that the number of poor people is increasing even within rich countries.

“How can we not mention the food crisis and global warming, which make it even more difficult for those living in some of the poorest parts of the planet to have access to nutrition and water?” he said.

The pope called for an effective strategy to fight hunger and promote local agricultural development, along with a reduction in military spending, which he said diverts enormous resources away from development projects. Rebuilding economic confidence, he said, will require implementing ethical principles based on human dignity – a task that is demanding, but not impossible.

“Today more than in the past, our future is at stake, as well as the fate of our planet and its inhabitants, especially the younger generation, which is inheriting a severely compromised economic system and social fabric,” he said.

The pope said the world is threatened not only by material poverty but also moral poverty, as seen in acts of discrimination and violence against thousands of Christians over the last year.

Declaring that Christianity is a religion of freedom and peace, he expressed his concern for Christian minorities, especially in Iraq and India, where attacks on church communities have worsened in recent months. The pope urged civil and political leaders to commit themselves “to ending intolerance and acts of harassment directed against Christians, to repairing the damage which has been done, particularly to the places of worship and properties, and to encouraging by every means possible due respect for all religions, outlawing all forms of hatred and contempt.”

The pope said it was particularly important that countries in central Asia protect religious freedom with legislation in line with international norms. But he said he was also concerned about Western society, and hoped that prejudice or hostility against Christians would not be cultivated simply because, on certain questions, “their voices cause disquiet.”

Turning his attention to the Middle East, Pope Benedict appealed for an immediate cease-fire in Gaza and the resumption of negotiations between Palestinians and Israelis, with the support of the international community. The current violence, he said, has provoked “immense damage and suffering for the civilian population.”

“Once again I would repeat that military options are no solution and that violence, wherever it comes from and whatever form it takes, must be firmly condemned,” he said. He said both sides should agree to “the rejection of hatred, acts of provocation and the use of arms.”

He added that upcoming elections would be crucial in choosing leaders who can lead their people to reconciliation. Israel holds elections in February, and Palestinians are expected to vote for new leadership sometime in the coming months.

In a brief reference to Iraq, the pope encouraged Iraqis to “turn the page” and to rebuild their country without discrimination on the basis of race, ethnic group or religion.

He said Iran was also important to regional and global peace, and he encouraged “tireless efforts” to negotiate a solution to the country’s nuclear program, one that satisfies Iran’s legitimate demands and the international community’s apprehensions.

The pope looked ahead to his trip to Africa in March, when he will visit Cameroon and Angola, and said he was praying that Africans could build peace by fighting moral and material poverty. He said he was especially concerned about children, many of whom have the tragic experience of being refugees in Somalia, the Darfur region of Sudan, and Congo.

He told the diplomats that in Zimbabwe, which faces a cholera outbreak as well as a political and economic crisis, the situation was “critical” and demanded considerable humanitarian assistance. He noted a “glimmer of hope” brought to central Africa by a recent peace agreement in Burundi.

In Latin America, the pope urged legislation making it easier for emigrants to reunite with their families. He also praised the commitment of some Latin American governments in waging an uncompromising battle against the drug trade and political corruption.

He said conflicts in the Caucasus region cannot be settled by war. He called for the respect of cease-fire commitments in Georgia, and said those displaced by fighting last year should be able to return to their homes as soon as possible.

The pope concluded his talk by saying the fight against global poverty in all its forms can be inspired by Jesus and his Gospel.

“Because he is the Son of God, he tells us that fraternal solidarity between all men and women is the royal road to fighting poverty and to building peace. May the light of his love illumine all government leaders and all humanity!” he said.