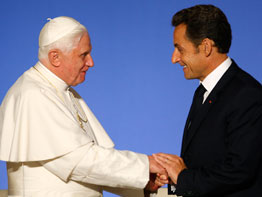 PARIS – Pope Benedict XVI warned that Western cultural efforts to marginalize religion and believers would bring disaster for humanity and ultimately “play into the hands of fanaticism.”

The pope made the remarks Sept. 12 in an address to academics at the College des Bernardins, a medieval landmark confiscated during the French Revolution and recently reacquired by the church for scholarly events.

The 81-year-old pontiff, looking energetic on the first leg of his four-day visit to France, was greeted with a standing ovation as he entered the vaulted hall of the 13th-century building.

Vatican officials said the pope had worked long and hard on this speech, which took up one of his favorite topics, the relationship between faith and reason.

After tracing the profound effects of medieval monastic life on Europe’s culture, the pope said that what drove the monks in their prayer and scholarship – “the search for God” – is equally necessary today.

While God has become for many “the great unknown” and often is thought to be absent from people’s lives, still the search for God and the desire to be found by him lives on, he said.

He warned that if modern culture tries to drive the question of God into the realm of the merely subjective and unscientific, that would be “the capitulation of reason, the renunciation of its highest possibilities, and hence a disaster for humanity, with very grave consequences.”

“What gave Europe’s culture its foundation – the search for God and the readiness to listen to him – remains today the basis of any genuine culture,” he said.

A group of Muslim dignitaries was in the audience, and the pope greeted them. Unlike his talk in Regensburg, Germany, almost two years earlier, this speech did not explicitly touch upon Islam and the need for reason in religion, but it raised some issues related to Islam in a broad sense, including religious fundamentalism.

The pope said the monastic tradition in Europe had promoted a “culture of the word” and invited Christians to a conversation with the word of God.

He said Scripture in this tradition is a dynamic unity involving each new generation, a process of understanding that becomes a process of living.

“It excludes by its nature anything that today is known as fundamentalism. In effect, the word of God can never simply be equated with the letter of the text,” he said.

Monasticism, the pope said, also was influenced deeply by the tension between freedom and obligation, which today risks degenerating into the poles of subjective arbitrariness and “fundamentalist fanaticism.”

“It would be a disaster if today’s European culture could only conceive freedom as absence of obligation, which would invariably play into the hands of fanaticism and arbitrariness,” he said.

The pope said work as well as prayer formed the basis of monastic life. This “culture of work,” which greatly influenced Europe and the rest of the world, saw labor as a special form of human resemblance to God the creator, he said.

The risk today, he added, is that man is losing this connection with God and assuming for himself the status of godlike creator.

The pope then turned to the question of missionary proclamation. For the Christian, he said, outward proclamation is not merely a propaganda effort, but is felt as an “inner necessity” to share the truth that God has revealed himself in the person of Christ.

This revelation distinguishes Christianity and underlines its connection to reason, since God now stands revealed and not simply imagined, he said.

“The novelty of Christian proclamation is that it can now say to all peoples: He has revealed himself. He personally. And now the way to him is open,” the pope said.

In this way, he said, Christianity responds to the deepest longings of human thinking, assuring that “at the beginning of all things, there must not be irrationality, but creative reason – not blind chance, but freedom.”